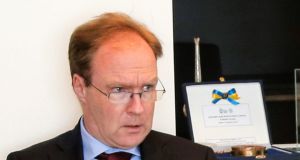 Sir Ivan Rogers, the former chief Brussels adviser to David Cameron and Theresa May, has warned against a ‘no-deal Brexit’. File photograph: EPA

Britain is potentially facing the worst domestic political turmoil since the Second World War over Brexit and a severe political crisis with the EU, the UK’s former chief EU diplomat Sir Ivan Rogers has said.

Speaking at an event in Dublin, the former chief Brussels adviser to David Cameron and Theresa May said Brexit negotiations were entering “a very critical few months” and warned against a “no-deal Brexit” as both sides remained deadlocked over an agreement ahead of the UK quitting the EU in March 2019.

“We face a very critical few months in the Brexit process, and the potential for a severe political crisis between the UK and the EU as well as for domestic British political turmoil on a scale we have not seen since the war,” the former diplomat told a British Irish Chamber of Commerce dinner in Dublin.

The former British ambassador to the EU called for both sides to take a more conciliatory approach to negotiations, bearing in mind the importance of reaching an agreement to both the EU and the UK.

“We need a great deal of wisdom to be shown on all sides if we are to avoid, over Brexit, the sort of bitterness which this continent thought it had left behind for good,” he said.

“All sides need a stable, amicable post-Brexit settlement, not an endless toxic running battle and any Brexit deal which was widely perceived as a humiliation in the UK, will not be a stable, lasting one.”

In a speech that painted a grim outlook for the forthcoming crunch Brexit negotiations, Sir Ivan said he believed there was a higher risk than markets were pricing of “a disorderly breakdown in Brexit negotiations and of our sleepwalking into a major crisis.”

This was “not because either negotiating team actively seeks it, but precisely because each side misreads each other’s real incentives and political constraints and cannot find any sort of landing zone for a deal, however provisional,” he said.

The former political aide described the EU-UK stalemate over reaching an agreement on the so-called backstop to maintain an open border in Ireland post-Brexit was “the biggest stumbling block to getting a withdrawal treaty over the line.”

Politically, the only way Mrs May can sell a Brexit treaty that includes “a legal all weather backstop” - which is opposed by the DUP that keeps her government in power - is if she can simultaneously point to a political declaration “which suggests a trade deal for all UK which will obviate the need for such a backstop ever to come into force,” he said.

Sir Ivan said UK government’s recent notices to the private sector about preparations for a “no deal” showed there was no World Trade Organisation “rule book” to fall back on and advocates of a “no deal” Brexit know that it would “bring several key sectors of the economy to a halt.”

They argue that “European self-interest” will deliver “a whole set of legal mini deals ensuring that it’s all alright on the night,” said the former diplomat.

“This is, I fear, simply delusional,” he added.

Bank of Ireland chief executive Francesca McDonagh, in her address to the chamber’s annual dinner, spoke about the risks from a disorderly Brexit to the close economic ties between the UK and Ireland.

“No one relishes the prospect of the important relationship between Ireland and the UK being undermined economically,” she said.

She said that the critical negotiating period ahead “calls for as much cool and calm rhetoric as we can muster, as the issues that are being discussed are fundamentally important ones, to the peace, prosperity and well-being of the people of these islands”.

John Cronin, president of the chamber, said there was “real concern” among business and trade organisations in Ireland and Britain that Brexit will damage British-Irish trade and hinder growth.

From 2003 to 2006, he worked as principal private secretary to then British prime minister Tony Blair.