Consequences of no-deal Brexit ‘go beyond what we can imagine’ 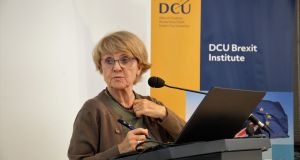 Polish MEP Danuta Hubner chairs a European Parliament committee that must sign off on any Brexit treaty. Photograph: Carl Gibney/DCU

There was an “openness” within the European Union to consider other ways of avoiding a hard border in Ireland to help secure a Brexit deal, an influential European MEP has said.

Polish MEP Danuta Hubner, who chairs a European Parliament committee that must sign off on any Brexit treaty, said there had to be “openness” from the UK too to find an alternative solution to the issue.

EU and UK negotiators are locked in a political stalemate over agreement on the so-called backstop that would guarantee an open border in Ireland in the event of no deal on future EU-UK trade.

“If UK has a better proposal for the backstop, we are open to discuss these things. In a sense, there is openness. It just all depends on whether there is also an openness on the UK side,” she said.

The British were offering no solution to maintain an open border in Ireland while London was still sticking with its “red lines” of leaving the EU single market and customs union, she said.

Ms Hubner, on a visit to Ireland to speak at Dublin City University’s Brexit Institute, warned of the possibility of the UK crashing out of the EU without a withdrawal treaty being agreed.

“We don’t have other options,” she said. “The consequences of no deal, I think, go beyond what we can imagine but we have to be prepared . . . it is a possibility or a likelihood.”

The Polish politician told the institute in her presentation that people were “extremely pessimistic” in Europe abut the Brexit negotiations, putting the chances of a deal between the EU and UK at 50:50.

She suggested that the UK should seek a Norway-type deal to join the European Economic Area and remain in the single market as Europe could not afford another “very specific, bespoke solution”.

“If the Brits were smart, then they should join the EEA and then look for changes later on,” she said.

The chair of the European Parliament’s constitutional affairs committee said that Brexit negotiations could slip past a key EU summit in October but November was the final deadline for a deal if EU lawmakers were to ratify it in time for the UK’s departure from the union in March.

“It might slip to November and we can still do it on time if we have it in November. Any further delay would really bring a threat of no deal,” she told The Irish Times before her address to the institute.

Ms Hubner said that the deep divisions British prime minister Theresa May was struggling with in her own party on Brexit were “certainly not helpful”.

“Whatever she is proposing, she sees two unhappy halves of her government because for some it is not enough; for others, it is too much,” she said.