‘Heartbroken’ family of Dolores O’Riordan miss her ‘every single day’ 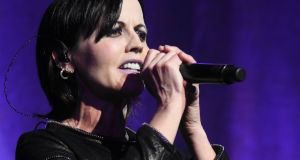 Dolores O’Riordan in 2017. Her family said that fame can “sometimes bring with it a heavy burden”. Photograph: Cathal Burke/vipireland.com

The family of Dolores O’Riordan said they remained “heartbroken” and missed her “every single day” and even more on Thursday, which would have been her 47th birthday.

The family issued the statement after Ms O'Riordan's inquest on Thursday, which found the singer had drowned in the bath of a London hotel room last January while intoxicated with alcohol.

They said while fans knew her as a hugely talented musician, her family knew her as a “loyal daughter, fun-loving sister and a dedicated mother to her children Taylor, Molly and Dakota”.

The family said fame can “sometimes bring with it a heavy burden” and they wanted to acknowledge that her life was “not without challenges particularly in the past few years”. But she had been receiving he best professional help.

The family had taken comfort in the volume of love and respect from her legions of fans since her death.

In Limerick there was shock at the verdict. Her friend Mick Dolan, of music venue Dolan’s Warehouse, said he was “just really shocked by the nature of her death”. Prior to her death O’Riordan had spent a final few days of rehearsing at Dolan’s.

O’Riordan’s death was “a huge loss to the city – it’s massive”, he added.

“She was rehearsing here just before she went over to London, and she was in really good form.”

“Every band that comes in here plays some form of tribute to her. She was Limerick.”

One of her school classmates, Catriona Egan, had tried to concentrate at work but couldn’t ignore the news headlines about her friend’s inquest.

“I just can’t think what to say,” Ms Egan said.

“It’s just so poignant that, at the moment she’s all over the radio in Limerick too, because of the Limerick hurler’s All-Ireland victory – she’ll be forever synonymous with it.”

A few weeks ago in Croke Park, O’Riordan’s Dreams had toasted the Limerick hurler’s All-Ireland hurling victory. “She’ll never really be dead to us in Limerick,” Ms Egan said.

Well-known Limerick singer and songwriter Brian O’Connor summed up how much O’Riordan meant to Limerick: “She was our superstar.”

Like Mr O’Connor, many in Dolores O’Riordan’s native city found the details of the nature of the singer’s death difficult to hear.

“I don’t like hearing these autopsy reports because I think the dead deserve their dignity,” said Mr O’Connor.

“It’s heartbreaking, it’s awful, and it’s basically dragging [her death] out all over again. I’m trying not to even think about it.”

“We are very proud of her and [the Cranberries’] achievements – they put Limerick on the map,” he said.