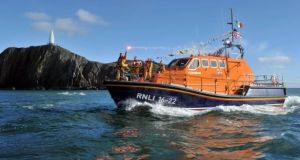 An elderly man is being treated in hospital after the RNLI carried out its second medical evacuation of a pensioner from a west Cork island within a fortnight .

The Baltimore RNLI All Weather Boat, the Alan Massey, was tasked by the Irish Coast Guard to provide medical assistance and evacuation for the man on Sherkin Island around 3.50pm on Sunday.

The Alan Massey, under cox Kieran Cotter, made its way to Sherkin where the crew administered casualty care to the man before bringing him back to the mainland at Baltimore at 4.20pm.

The Irish Coast Guard had also alerted the HSE and an ambulance and paramedics were waiting in Baltimore to provide medical treatment for the man before taking him to hospital.

According to Kate Callanan of Baltimore RNLI, the sea was calm but there was a force 4-5 wind blowing during the transfer operation which was carried out successfully by the volunteer crew.

The evacuation was the second of pensioner by the Baltimore RNLI and followed the transfer of an 88-year-old-woman from Heir Island to the mainland for medical treatment on December 29th.

Ms Callanan said both medical evacuations highlighted the value of the service and urged anyone in any difficulty living on an island to contact the Irish Coast Guard immediately for assistance.

“The RNLI and other rescue/emergency agencies provide a vital service to those living or staying on islands. If you are in difficulty on or near the coastline call 999 or 112 and ask for the Coast Guard.”