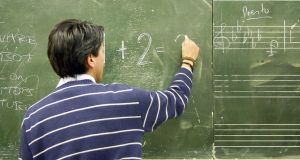 Principals and school managers have urged measures such as lifting all restrictions on employing retired teachers and making it easier for foreign teachers to work here.

It is largely a hidden problem. No school wants to admit it has unqualified or “out of field” teachers delivering key subjects for students at Leaving Cert level or taking classes at primary level.

For parents – and students – the consequences may often materialise only in the form of “free classes” at second level, or children being sent to other teachers’ classes due to staff shortages at primary level.

However, in a series of surveys and reports seen by The Irish Times, school management bodies and unions have warned in stark terms how acute staff shortages are impacting in different ways across the primary and secondary system.

A recent survey by the largest management body for primary schools, the Catholic Primary Schools Management Association – which represents 2,800 primary schools – found that 90 per cent had experienced difficulty sourcing a substitute teacher.

They estimated that between September and the end of October 2017 their schools experienced about 15,552 days of substitutable absences, of which only 10,328 (66 per cent ) were covered by a registered teacher.

“We advertised for a full maternity leave from October to May, with potential for finishing the year with us. Only seven applications. Of the seven, only one presented for interview,” said one principal.

Another report compiled by the Irish National Teachers’ Organisation details in stark terms how these issues are playing out in individual schools.

A principal in Co Meath said he did not receive any responses to a maternity post advertised late last year.

“I am filling the position on a day-by-day basis using a retired teacher and a Hibernia [online training] course student. There have been approximately eight to 10 days where I had no sub,” he says.

“To ensure continuity for the class I have moved a full-time learning support teacher into first class since midterm. This was a big ask two months into the school year. She will take this class for the rest of the year. The subs are now covering learning support.”

Another principal in the Meath area reported details of three unfilled posts during the current academic year.

“In spite of every effort to fill these positions, they remain unoccupied. This is of great concern to our school community,” the principal said.

Reports compiled by school managers show students are missing out on learning as either a teacher with the subject specialism is not available or no teacher is available.

Subject loss and/or restriction of subject options is also a reality for many students, say school managers, while some also say curtailment of sports, games and other extracurricular activities is now a reality.

The State Examinations Commission has also reported difficulty in recruiting examiners to assess elements of the State exams, such as oral exams, as school managers in many cases say they cannot release teachers.

The Association of Community and Comprehensive Schools, which represents 96 community and comprehensive schools, found in a 2017-2018 survey that almost all of its schools have “serious difficulties” recruiting casual/short-term substitutes.

The most pressing problems were in Irish, European languages such as French, Spanish and German, along with maths, biology and science.

“The majority have had to advertise temporary vacancies a number of times – some with ongoing advertisements and no applicants,” it found,

As part of the survey, schools identified where – following advertising and re-advertising – there were no applicants for positions.  These schools were reported to be engaging unqualified personnel to teach subject specialisms. It found a number of key vacancies had not been filled since September 2017.

The Education and Training Boards Ireland, the management body for more than 200 secondary schools, reports a “serious shortage” of teachers in the same subjects.

“The shortage of qualified teachers in some subject areas has resulted in students in their Leaving Certificate year, for example, being left without a qualified teacher in specific subjects for months on end,” it stated, in a submission to the Department of Education.

“Quite naturally, students and their parents are alarmed by this and, of course, they blame the school management authority for something that is totally outside its control.”

The biggest school management body at second level, the Joint Managerial Body, conducted a survey of 153 schools and found the most challenging subject areas to fill vacancies were Irish, French, maths, home economics, German and science. Its survey yielded revealing comments by school principals and managers.

“It is virtually impossible to obtain an effective physics or French teacher. The standard of some people interviewed was very low, which leads me to believe that applicants should undergo an interview process for [teacher training] places . . . The candidates I interviewed had low standards of grammar,” one principal responded.

Another commented: “Why is Irish a compulsory subject when it is almost impossible to find a substitute teacher for this subject?”

In another case, a school manager noted: “The situation managers find themselves in is ‘anybody is better than nobody’. This does not serve students or parents and managers, who know that they have appointed unsuitable staff and end up dealing with legacy issues long after the appointment date.”

Principals and managers also urged a number of steps to help tackle the “crisis”, such as lifting all restrictions on employing retired teachers and making it easier for foreign teachers to work here.

“The brain drain from our schools has been significant and young teachers are taking the opportunities to get job security abroad, rather than casual part-time work at home,” one principal noted.

Another commented: “Salaries do not cover the rent in Dublin, so teachers from outside Dublin are not staying in the city. Is it time for a Dublin weighting, as is the case in greater London? We have recently had to find accommodation to entice teachers to move/stay.”