Child rapist sets up website to taunt victim from prison 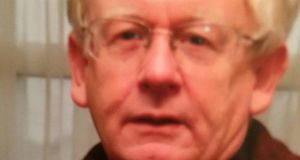 Brian Doolan: his website seeks to attack his nephew Stephen Kershaw, the Garda, One in Four and The Irish Times

A Garda investigation has begun into a website that a child rapist is running from prison to taunt his victim.

Brian Doolan, a former legal academic who is serving a 10-year sentence for 42 counts of child rape and other sex offences, has published a photograph of his victim, his nephew Stephen Kershaw, as a boy on the site. It was taken in the 1980s, around the time Doolan was secretly abusing him.

Doolan, who was jailed in 2016, has also published written content that seeks to attack Mr Kershaw, the Garda Síochána, the One in Four victim-support organisation and The Irish Times, which was first to identify Doolan last year, after his anonymity had been protected for years.

The 72-year-old has been disciplined by the Irish Prison Service for some of the content of briandoolan.com; he was denied visits and phone calls for 30 days as punishment. Doolan has now been granted permission to challenge the outcome of that disciplinary process.

At a High Court hearing last month the court was told that Doolan had used a telephone at Arbour Hill Prison to instruct his son to post comments and content on the website. Security sources said neither the Garda nor the prison service had the power to close the site. However, the same sources said a criminal investigation of the site’s content had begun.

The Garda and the Irish Prison Service said they could not comment on an individual case.

The website was created last year. All of the content posted so far relates to Mr Kershaw, a businessman in his 40s, and the legal process that resulted in Doolan’s conviction. Mr Kershaw’s testimony secured the conviction against his uncle.

In text accompanying the photo of Mr Kershaw as a child, Doolan says: “When Stephen Kershaw publishes his mountaineering experiences entitled ‘Small Mountains I Have Scaled’ the copyright owner of this photograph will graciously permit its use (waiving any fee) provided the copyright owner is named and acknowledged.”

Doolan, who refers to himself as “Clean Hands Justice” on his website, wrote books on Irish law. In 2011 he was updating his best-known book, Principles of Irish Law, with analysis of new children’s-rights legislation when he knew he was under investigation for child rape.