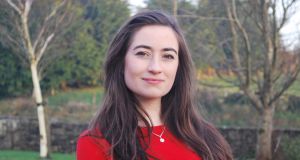 Julia Dolan (21), a science student at UCD, who is hoping to go on become a maths and science teacher

During her first year studying maths and physics in university, Julia Dolan says there were 30-40 others taking a module in teacher education.

“I think there’s a feeling among many students that teaching isn’t professionalised, or that it’s not regarded with the same respect that it used to be,” says Dolan (21), who is from Galway and is in the third year of her undergraduate maths and science degree at UCD.

“Maybe they feel it’s not as exciting as the other options available in science, or that it’s not research-led.”

This shortage of teachers in maths, science and languages is beginning to have an impact on secondary schools in a big way.

Although there are ambitious Government plans to become a European leader in Stem subjects – science, technology, engineering and maths – many schools are struggling to find qualified teachers.

There are also financial barriers for students interested in teaching.

Most new entrants to second-level teaching complete an undergraduate degree and go on to complete a two-year professionals master’s in education. But this can cost €10,000-€15,000.

A more affordable option are undergraduate “concurrent degrees”, such as Dolan’s, where a student takes on a teacher-training module and then requires just one year of master’s qualification.

Dr Shane Bergin, a physicist and assistant professor in science education at UCD, has seen first hand the drop in numbers applying for science teaching.

“This is at a time when the number of students studying physics at third level is at a record high,” he says.

He says financial barriers are one reason – although negative perceptions of teaching are another.

“While seen as a worthy profession, the working terms and conditions for teachers in Ireland are not attractive – such as pay inequality and lack of investment in schools,” he said. “Teaching physics is not seen as doing physics.”

Dr Bergin has a number of suggestions for tackling this, such as allowing science students to take “taster” courses.

“Ireland is one of the best places in the world for informal learning, such as the BT Young Scientist. Imagine how positive it could be in connecting undergrad physics students with their old secondary school. Students could see first-hand the positive aspects of being a teacher.”

As for Dolan, she is undeterred and determined to pursue a career in teaching maths and science.

“I’m doing science because I love maths and science. Teaching is what I want to do. You’re using what you know to help other people.”