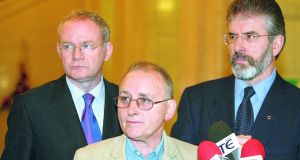 A man in his 40s and a second man in his 30s were arrested in Co Donegal on Sunday afternoon.

A Garda spokesman said that both were detained at Letterkenny Garda Station under Section 30 of the Offences Against the State Act. One of the individuals was previously arrested and questioned about the murder in 2011 but released at that time without charge.

Donaldson (55), a former Sinn Féin group administrator at the Stormont Assembly, was shot dead in a remote rural cottage near Glenties in Co Donegal in April 2006. His killing came four months after he confessed to working as a British agent for police and MI5 for 20 years.

His exposure as an IRA informer directly led to the collapse of Stormont’s institutions. The killing was claimed three years later by the Real IRA.