Rally is not about the future careers of the players currently suspended, says organiser 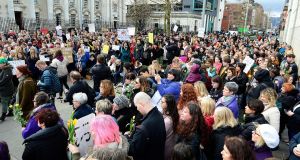 The Belfast Feminist Network (BFN) is to stage a demonstration outside Ulster Rugby to encourage the club to “get rid of the culture of sexism” it says exists in its sporting community.

The “Stamp out Misogyny at Ulster Rugby” rally outside the Kingspan Stadium on Friday evening ahead of the side playing PRO14 rivals Ospreys is part of a “wider fight for change”, according to one of the event organisers, Kellie Turtle.

On March 28th, Ulster and Ireland players Paddy Jackson (26) and Stuart Olding (25) were acquitted of raping the same woman in June 2016.

Two of their friends, on related charges, were also found not guilty.

Ulster and the IRFU officials are currently determining the futures of the two players who have been “relieved of all duties” since the legal process began.

Concerns around degrading and offensive WhatsApp messages between the players and their friends surfaced during the trial and have caused concerns to the wider public and Ulster sponsors.

At the upcoming rally BFN activists will hold placards emblazoned with slogans written in the colours of the women’s suffrage movement – white, purple and green.

They include “Ulster Rugby Lead The Way Goodbye Misogyny”, “Promote Healthy Relationships” and “Stand Up for the Ulster Women”, a nod to the SUFTUM (Stand Up For The Ulster Men) phrase chanted by rugby fans.

Ms Turtle told The Irish Times the rally was not about the future careers of the players currently suspended.

She outlined what BFN activists would like to see happen.

“We want there to be genuine accountability for all those who have been exposed as deeply misogynistic in their correspondence with each other, in accordance with their code of conduct,” she said.

“We want to hear from them how they intend to take action to get rid of the culture of sexism that clearly exists in their community.

“Proper education for their players and awareness-raising campaigns for the fans.

“They should work with the great women within their own structures who we know have been trying to change the culture for years with limited support from the rugby establishment.”

Ms Turtle said the street protests that took place across Ireland after the trial ended were “an important expression of public anger at what this trial revealed about the failings of our criminal justice system and the disgusting sexism and misogyny of these men who are prominent role models”.

“This Friday’s rally is one part of our wider fight for change,” she said.

“We believe Ulster Rugby have a duty to stamp out misogyny from within their community.

“We are demanding that they take action and wish to express our disgust that this harmful culture of sexism has been allowed to fester for too long.”

Ms Turtle said while many in the broader Northern Ireland Women’s Rights Movement would not want to see the players representing Ulster “given what has been revealed about their character, our rally is about much more than that”.

“Our wider demands call for changes to the criminal justice system and media reporting of rape trials, resources for support services and education on consent in schools,” she added.

Jan Melia, chief executive of Women’s Aid, said: “In the light of the Belfast rape trial, we and our partners are keen to let victims and survivors know that we are here to support them.

“We have been working towards providing a rape crisis service for some time, and are all too aware of the huge gap in crisis support for all victims of rape in Northern Ireland.

“We have structures in place and we are in the process of recruiting volunteers and finalising venues which we will be publicising widely.

“We will be working in partnership with Nexus, the Men’s Advisory Project, local Women’s Aid groups and other partners to ensure rape victims have all the support that they need when they need it.”