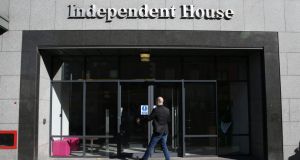 Taoiseach Leo Varadkar has for the first time expressed concern at the alleged breaches of personal data at Independent News and Media, adding that democracy could not be served without an independent media or a diversity of press ownership.

Speaking at the launch of the Project Ireland 2040 plan in Galway, the Taoiseach said he would always have concerns about personal emails and information being accessed.

Mr Varadkar said: “What will happen now is that the Government office, the Office of the Director of Corporate Enforcement [ODCE] is going to mitigate an investigation, and at least until that is completed I cannot say anymore about it.

“But I think it’s appropriate that there is an investigation by a Government office.”

Minister for Communications Denis Naughton concurred, saying there was no doubt there were concerns.

“Let both investigations into these allegations take place, but it is important to distinguish between the alleged board activities and the work of the employees in the company who are trying to go about their work on a day-to-day basis.

“There’s a need for a strong, independent media, one we can all be confident in.”

Meanwhile, Sinn Féin has confirmed it will raise the issue of alleged INM data breaches when the Dáil meets after the Easter recess next week.

In a statement, the party leader Mary Lou McDonald said the reports of a data breach at the company were “very disturbing”.

“The allegation that a firm was hired to conduct an interrogation of electronic records of journalists and others at INM is extremely concerning. The allegation that files were taken outside of the company and searched is alarming,” she said.

Ms McDonald stressed that while it was necessary to await the full publication of the ODCE affidavit to the High Court, significant concerns arose from the reports so far.

“An independent press is fundamental to any functioning democracy, and this must include the ability of journalists to do their job without fear or favour or without breaches of confidence,” she said.

“I will be raising this matter on the floor of the Dáil next week.”

Last weekend, Fianna Fáil leader Micheál Martin expressed “profound concern” at the claims over INM, saying he was “taken aback”. He said they raised questions about the independence of the media and the health of democracy.

Ian Drennan, the Director of Corporate Enforcement, will ask the High Court next week to appoint an inspector to the company after revelations that data from INM servers had been taken out of the country and interrogated.

His office has told the High Court it is focusing on 19 “persons of interest” in the data breach, including journalists and executives at the group and lawyers for the Moriarty Tribunal.

The ODCE also said a company owned by Mr O’Brien paid for the examination of the INM data by outside companies.