How DNA experts can identify Tuam babies: the full story 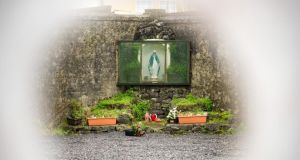 Excavations carried out in Tuam, Co Galway, at the site of a former mother-and-baby home between November 2016 and February 2017 found a significant quantity of human remains, aged from 35 foetal weeks to three years, interred in “a vault with 20 chambers”.

The Mother and Baby Home Commission of Investigation, which had ordered the excavations, said initially it had not determined what the purpose of this structure was “but it appears to be related to the treatment/containment of sewage and/or waste water”.

The evidence in relation to the site, while clinical in its description, confirmed what was widely suspected. The full horror of what appeared to be a cruel and inhuman facility supposedly looking after vulnerable mothers and their children was emerging, backed by undeniable facts.

The commission was set up in 2015 after historian Catherine Corless published research revealing death certificates for 796 children at the Tuam home from 1925 to 1961, with no indication of their burial places.

Carbon dating showed the remains date from the 36-year time frame (1925 to 1961) in which the home was run by Bon Secours nuns. The commission expressed shock at the discovery, and is continuing its investigation into who was responsible for the disposal of human remains in this way.

An Expert Technical Group (ETG) report published in December 2017, commissioned by the Department of Children and Youth Affairs, confirmed the vault was a sewage tank.

At the request of Minister for Children Katherine Zappone, the ETG distinguished five options to deal with the site, ranging from “memorialisation” to forensic excavation of the total available area which, Ms Zappone said, were “explored and presented in the context of internationally accepted best practice”.

On what is termed “humanitarian forensic action” – essentially, the use of forensic science to recover and identify individuals in mass death scenarios the report identified factors for consideration including collection of witness testimony; further testing and evaluation of specific areas and a full forensic anthropological analysis.

It said the issue is “complex” and “individual identification of remains here [Tuam] is unlikely without further significant investigation”. “Commingled” remains at one location makes identification “particularly challenging”.

There was a “risk of destruction to human remains” that raised ethical issues while “testing skeletal remains is time-consuming and technically difficult as specialist DNA extraction techniques have to be applied”. It alluded to problems associated with DNA degradation.

The ETG concluded that the situation in Tuam was “an unprecedented one for the agencies that usually deal with medico-legal death investigations in Ireland”. It said it had not identified any directly comparable cases, either nationally or internationally, “that involve the complexities of commingled juvenile human remains, in significant quantities and in such a restricted physical location”.

The report also referred to the potential difficulty of collecting samples from living survivors or relatives and establishing the genetic relationship of them to the deceased.

Following its publication, Ms Zappone said the “particular and complex circumstances of the situation in Tuam [are] unprecedented from a technical perspective”.

The Government has not made a decision on how to proceed, although a public consultation process was initiated by Galway County Council seeking views from members of the public – it closed last month.

They contend in their submission to the public consultation process that many of the problems articulated in the ETG report on use of DNA forensics at the Tuam site, are “overstated”, and they “disagree with the pessimistic and guarded tone adopted” on the potential to identify the remains.

They say the emphasis and focus solely on traditional (STR) DNA analysis as the only means to confirm identity is surprising. They say the ETG appears to ignore the potential of using more advanced technology (known as high throughput sequencing - HTS - coupled with single nucleotide polymorphisms - SNPs) to analyse degraded DNA.

The mapping of the complete genetic make-up of a human was completed in 2003 and transformed the ability of scientists to retrieve DNA from archaeological material. Rapid advances in genetic technologies since (including HTS and SNPs) have dramatically enhanced the ability to identify remains, according to the team, which includes experts in genomics and DNA databanks.

Two of the authors, Prof Dan Bradley of TCD and Prof David MacHugh of UCD, pioneered the study of ancient DNA in Ireland. Two decades ago, using bones excavated at the Wood Quay Viking settlement in Dublin, they were the first Irish scientists to publish results in this field. They have since continued to work in paleogenomics, (applying high-throughput DNA sequencing) to retrieve complete genome sequences and reconstruct ancient population movements using archaeological material from humans, and wild and domestic animals.

They use these techniques with vast data banks to determine genetic relatedness at a relatively low cost, they note.

They propose taking small samples from the petrous bone in the lower skull as the best course to identify the remains in Tuam, beginning with a pilot study of samples from 20 juvenile skulls. “The power of these advanced techniques was vividly illustrated recently when the Taoiseach’s office requested the assistance of one of the authors in identifying the remains of the Irish Easter Rising Rebel Thomas Kent.”

That was Dr Jens Carlsson. In a collaborative project which he led, involving An Garda Síochána, Forensic Science Ireland and UCD (where he is based), SNP analysis using HTS was successfully implemented in confirming the identity of Kent.

The remains of an individual believed to be Kent were buried for 99 years. Extraction from the petrous bone yielded significant quantities of DNA. By using the new technology (HTS/SNP), they were able to confirm the relationship between him and two of his living nieces. The UCD-TCD team accepts DNA degradation is a serious issue for both the traditional and new analysis methods and depends on factors including age, the environment, source of DNA and extraction method.

“However, HTS allows for the retrieval of vast amount of SNP data and allows for a greater likelihood of identification [in the Tuam case],” they suggest. A legacy issue of databases built up using older STR technology is acknowledged but has “little relevance for the identification of these remains in Tuam”.

Using the petrous bone would not only be the preferred method for securing DNA, but also for minimising further damage to the human remains, as the bone is accessed from the inside of the skull with a very small area affected.

Their submission adds: “There are challenges, but we would suggest that the expertise exists within Irish research institutions to overcome them.”

“On the face of it, the State has access to the tools to identify the remains at Tuam using DNA forensic techniques”, yet they say the ETG report is heavily reliant on the opinion of expertise in how forensic DNA evidence is presented in court settings using standard technology and not the kind of advanced technology now available.

Exhumation will inevitably lead to questions about maltreatment and possibly criminality. The ETG report refers to difficulties in identifying remains at the state-run Dozier Boys School in Marianna, Florida, where it is believed beatings and punishments throughout its 111-year history contributed to the deaths of 100 boys buried in unmarked graves.

“The difficulties of identifying remains at that school are emphasised quite a bit in the ETG report,” said Dr Stephen Donoghue, the fourth member of the UCD-TCD team, who has a particular interest in DNA in a human rights context and has worked on the Irish Innocence Project which deals with cases of wrongful conviction.

Seven out of 51 remains were identified but “the team at Dozier were using the routine STR [standard] profiling technique to identify the remains and this appears to be the focus of the ETG report, he told The Irish Times.

On the issue of the possibility of confirming maltreatment in Tuam, Dr Donoghue added: “The ETG report never mentions the various efforts to bring criminal charges in the Dozier scandal. The author of the Dozier Report confirms that the morphology [shape and structure] associated with the remains’ bones is consistent with maltreatment. In contrast the ETG report emphasises the potential for non-criminality.”

In the future, using more advanced genomics technologies, he added, it may be possible to detect “epigenetic” changes that are not due to DNA sequence variations, but due to chemical modifications of DNA and the molecular scaffolding that, in conjunction with DNA, makes up chromosomes, which hold our genes that determine our physical traits and bodily functions.

“Epigenetic changes like these in bone cells/tissues might be indicative of nutritional or psychological stress,” he explained. “However, this is highly speculative and currently it is definitely not realistic to use this approach with the remains of children interred at Tuam.

“In fact, it would actually be much easier to detect maltreatment or nutritional stress through examination of skeletal material using conventional forensic anthropology (without reference to DNA or genomics).”

DNA bone testing may also be used to identify certain forms of tuberculosis or syphilis. However, this is beyond the scope of what the UCD-TCD team propose.