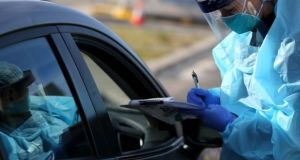 Covid-19 is “grumbling” around younger people in Ireland threatening a “big explosion” again through the older, more vulnerable population, an infectious diseases expert has warned.

Prof Sam McConkey, head of the department of international health and tropical medicine at the Royal College of Surgeons Ireland, said less vigilance because of lower numbers of cases risked sending the virus “wild” again.

The current trend in confirmed cases is “very similar to what we had in February and March before we had large numbers of elderly people getting it, who sadly passed away from it,” he said.

“This is the sort of grumbling of the virus among young healthy people, who are often minimally symptomatic.

Dr Ronan Glynn, the acting chief medical officer, said earlier this week that 75 per cent of cases are now among those under 45, with a median age of 33.

While young people are unlikely to die from the virus, they are likely to spread it around, said Mr McConkey.

“I think we can’t relax. I think some of us feel there are very few deaths now, the numbers are down a lot from March and April, so let’s just relax. I think that is very much the wrong message,” he said.

Mr McConkey, who advocates suppressing the virus until there is zero unexplained community transmission, said Ireland is struggling to get to that stage.

“We are not there yet. And unfortunately as long as we’ve got unexplained community transmission on the island, there will still be a risk of it going into a big explosion like we had in February and March,” he told Newstalk.

Citing New Zealand as an example, Mr McConkey said zero unexplained community transmission could mean sports fans returning en masse to matches and “we get back more to normal”.

“It is a matter of the whole population keeping together, keeping our message, social distancing and masks and so on,” he added.