Scrums could be dropped for recreational rugby’s return in Britain 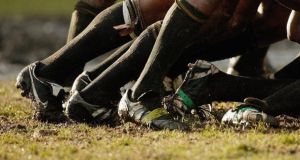 Rugby’s governing body in England has been targeting a return to full-contact rugby for grassroots clubs by the end of the year. File photograph: Getty Images

The British government sports minister Nigel Huddleston has indicated that there will have to be changes to the way recreational rugby union is played before it is allowed to return, including potentially no scrummages until after Christmas.

Community rugby remains on the second stage of a six-part road map for a phased return in Britain, with players allowed to exercise within a small group of six players provided they maintain social distance. However, no face-to-face contact is permitted and equipment sharing must be kept to a minimum.

The English RFU, which has submitted detailed proposals for community rugby to the department of digital, culture, media and sport, said earlier this month that it was hoping “to have some positive news soon about the potential move to the next stage”. The game’s governing body in England has also been targeting a return to full-contact rugby for grassroots clubs by the end of the year.

However, Huddleston was more cautious when asked whether recreational rugby would be back next season. “I hope so but where you’ve got full contact, there are some sports – judo, karate, other full contact sports – where there’s particular challenges,” he said.

“I think inevitably there are going to be some changes. It could be broadly recognisable, but the reality is, for a temporary period of time, we’re going to have to probably see some changes.”

In May, World Rugby said that doing away with reset scrums and eliminating “upright face-to-face”tackles would significantly reduce the risk of coronavirus transmission. The global body also advised making a change of jerseys and headgear at half-time compulsory, banning huddles on the pitch and outlawing spitting.

When it was suggested to Huddleston that there might be no scrums in recreational rugby until after Christmas, he replied: “Potentially, but we’ll have to see. It will be based on medical and other advice.”

All sports governing bodies have had to submit plans for a safe return to the DCMS as well as Public Health England for approval and Huddleston said he had been impressed by the level of responsibility and awareness across the industry.

“Nobody’s trying to come in with something to try and get away with something that they know is transparently not going to work,” he added. “But I think there’s a recognition that we might have to see a few changes with the full-contact issues, or where there’s that risk of respiratory challenges.” - Guardian