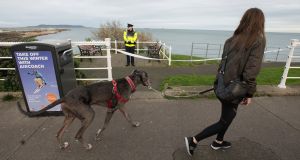 The scene of the crime on December 24th, 2017, at Dún Laoghaire, Co Dublin, where Stephanie Ng was assaulted. File photograph: Dave Meehan

In recent years the office of the Director of Public Prosecutions (DPP) has shown an increasing tendency to appeal sentences it considers too soft – but such cases are still relatively rare.

Last year it took 46 leniency appeals, a relatively small figure compared to the 200 appeals taken by offenders against the severity of their sentence.

Even rarer are leniency appeals in cases involving a teenage offender. For this reason there was a huge amount of debate and consideration within the DPP’s office before it was decided to appeal the sentence handed down to a boy who attempted to murder a woman in Dúun Laoghaire two days before Christmas 2017.

The DPP does not take such appeals out of a sense of vengeance or a vague notion that the original sentence was too soft. It must point to specific areas where the sentencing judge made an error in handing down punishment.

In this case it argued that while the overall sentence of 11 years was appropriate, the provision that this sentence be reviewed after five years was not.

It argued the planning and preparation which went into the attempted murder of Stephanie Ng (25) meant the case lay at the highest end of the scale, even accounting for the fact the boy was 15 years old at the time.

The boy met Ms Ng on a social media app and took her to several secluded locations before choking her unconscious and slitting her throat in an area beside the town’s old sea baths. She only survived though a combination of luck and resilience.

At the time, gardaí were sure he would attempt to kill again if released. He later said he was initially unhappy the young woman survived because it meant there was more evidence against him.

The three-judge Court of Appeal was faced with a difficult task. Before the court were two versions of the same boy.

One version was a highly intelligent and incredibly dangerous young man who knew the difference between right and wrong but simply did not care.

The other version, that presented by the boy’s parent, was of a scared and vulnerable teenager who could not silence the voices in his head – voices made worse by the Prozac he was prescribed.

It was a compelling argument but it had a major flaw- the boy’s parents could not, or would not, present medical evidence to support this version of their son.

After his arrest he was examined by Prof Harry Kennedy, one of the country’s leading psychiatrists. The family would not, however, give Prof Kennedy permission to present his findings to the court.

No opinion on Prozac

Instead the court turned to a UK psychiatrist, Dr Richard Church, who carried out his own examination and reported the boy as at risk of developing a “psychotic mental illness” and representing a danger to others if released. The doctor also said he could not give an opinion on what role, if any, Prozac played in the episode.

The end result came on Wednesday when, despite extensive oral testimony from the boy’s parents, the court decided to increase the minimum time he must serve from five to seven years. At that point the accused will be 22 and, officials hope, will have a greater insight into his offending.

Importantly, the appeal court also set out procedures for this review. Every two years various reports will be made on his treatment, so when the review takes place there will be a complete history of his progress.

This procedure will serve as a model for future cases involving serious juvenile offending, cases which appear to be becoming all too common. In the words of the boy’s barrister, Patrick Gageby SC: “In the last few years, we’ve all done more juvenile cases than in the past 30 years.”