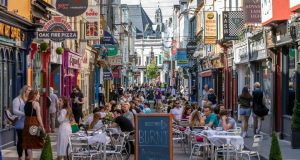 Cork City Council has unveiled a €5 million Covid-19 package to encourage cycling in the city and support the hospitality sector with temporary pedestrianisation for outdoor dining.

The Re-Imagining Cork City plan was unveiled by Cork City Council chief executive Ann Doherty at Cork City Hall on Wednesday in a move which marks an acceleration of long-developed plans to make Cork more sustainable and safer in the short term during the current Covid-19 pandemic.

“Economic and social recovery against the backdrop of Covid-19 presents challenges for communities and businesses in Cork,” Ms Doherty said. “We need a shift in perspectives, a ‘reimagining’ of Cork and high levels of partnership and collaboration if we are to mitigate the impact of the pandemic.

“The programme published today and achieved with the support of city councillors is the first step towards a more comprehensive re-drawing of the city as we know it with intensified focus on more sustainable transport and a reduction in through traffic.”

Some €1.5 million will be spent on resurfacing and relining 6km of existing cycle lanes while more than 43 new bicycle racks are being installed including 10 at a new indoor space at the North Main Street Shopping Centre.

Meanwhile, Lord Mayor of Cork, Cllr Joe Kavanagh, warmly welcomed the plan. He said temporary pedestrianisation of some 14 city centre streets would facilitate the creation of up to 1,000 outdoor dining spaces, thereby supporting both social distancing and local business.

Director of operations at the council, David Joyce, said it had received 60-70 submissions in relation to each street flagged for pedestrianisation. He said “95 per cent plus were positive and supportive of the closure to traffic proposal”.

Mr Joyce said its expected consultation would begin shortly with traders and business people on Oliver Plunkett Street to extend the current pedestrianisation of the street after 5pm to possibly the late night.

Cork South East Green Party Cllr Lorna Bogue welcomed the Re-Imagining Cork plan but said it could not be “the end of the road” for improvements to pedestrian and cycling infrastructure, adding that more needs to be done to ensure that Cork becomes a safe and sustainable city for cyclists.

“It’s certainly a sign of good progress and it’s great to see, in particular, the creation of new cycling lanes on Centre Park Road, Monahan Road, along the Quays and on the South Mall as well as the addition of bike parking for up to 500 cyclists in the city,” said Cllr Bogue.

Cllr Bogue also welcomed the announcement that the council is to install bollards on Alfred Street, South Main Street and Washington Street, which the Green Party and cycling campaigners had long flagged as blackspots for dangerous illegal parking.