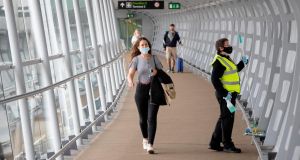 People can now travel to green list countries if they are on the pandemic unemployment payment, or other forms of unemployment assistance. Photograph: Colin Keegan/Collins Dublin

What happened on Wednesday morning?
Firstly, the Government U-turned. Minister for Social Protection Heather Humphreys confirmed saying that those on unemployment assistance can travel to green list countries without their payment being interrupted.

How is this different from before?
On Tuesday night, Ms Humphreys was arguing the opposite, saying that PUP and other jobseekers’ payments are available only to those in the country. The traditional flexibility for holidays was suspended since July 10th.

So now, what’s the bottom line?
People can travel to green list countries if they are on the pandemic unemployment payment, or other forms of unemployment assistance. However, anyone leaving the State permanently, or going to a non-green list country for non-essential reasons will still lose it.

What about people who have already lost their payment for going on holiday?
Taoiseach Micheál Martin and Ms Humphreys have promised a review. Just how the review will proceed, how long it will take, and what refunds it will make, if any, is unclear. However, the Department of Social Protection is asking those who feel wronged to contact it.

How many people might be affected by that anyway?
We only have Government statements to go on, not published data, but Ms Humphreys has said 90 per cent of the 2,500 or so who have had payments suspended had left the State permanently. That suggests only 250 or so could be holidaymakers. It’s not clear exactly, though, how Social Protection tells the difference between someone leaving permanently and a holidaymaker.

And what about quarantining?
This issue has receded into the background a little. Earlier this week, Social Protection said people quarantining after holidays could not claim unemployment assistance.

Lawyers believe this is a flimsy argument, especially if it is withheld on the grounds that the person is not “genuinely seeking work”, since one could easily be doing that on the phone or internet.

Are there any other legal issues?
The PUP is being put on a statutory basis at the moment, so that should shore up the Government’s position for future cases. However, the Irish Council for Civil Liberties (ICCL) and the Free Legal Advice Clinics (Flac) all suggest that decisions made up to now could be challenged. If so, that requires someone to challenge them.

What about data privacy issues?
Earlier this week, there were concerns that Social Protection had harvested passenger data from the airport or airlines. However, it denies that, saying it gathers all of its information from social welfare inspectors working in the airport alongside gardaí.

So that’s the end of that then?
Not quite. Social Protection relies on a piece of legislation from 2012 which gives it the power to ask people questions at ports and airports, but they must have a reasonable suspicion that someone is trying to cheat the system.

Flac has drawn attention to this need for an evidence-based suspicion, amid widely circulating reports of people being asked for their information at the airport.

“Checks at the airport cannot be randomised or based on arbitrary criteria or happen by way of blanket checks on all passengers waiting for a flight,” it argues, adding that airport checks should be “quite rare”.

Meanwhile, there is the Data Protection Commissioner. It has already asked Social Protection and lodged more after it got the first replies. We have not seen the last of this, not by any stretch.