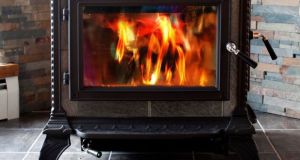 Environmental groups have called for a nationwide ban on all smoky fuels, including peat and wood

The Environmental Protection Agency (EPA) has called for a nationwide ban on the burning of smoky fuels in its annual air quality report.

Dr Ciara McManus, director of the EPA’s office on environmental monitoring, said that particulate matter from solid fuel leads to 1,300 deaths per year as the very fine particles can lodge in lungs, get into the blood stream and cause harm to lungs, heart and organs throughout the body.

Speaking on RTÉ radio’s Morning Ireland Dr McManus explained that the EPA now monitors levels of particulate matter in 84 locations around the country and in 33 points there was an “exceedance” of acceptable levels according to World Health Organisation guidelines.

In Dublin exceedance comes from traffic, but in towns and villages it comes from particulate matter caused by burning solid fuel – peat, wood, coal - in open fires and stoves in people’s homes.

The level of particulate matter depends on the quality of the fuel and that way in which they are burned.

“Open fires lead to very large levels of these particles getting directly into the air in our living room and also into the air in our environment. That’s why we see it so much in towns and villages because you’ve got an accumulation of what’s coming out of everybody’s house.”

With the 84 locations the EPA now monitors it is starting to see more and more problems, “in areas where we didn’t know there were problems before because there wasn’t this continuous monitoring, it’s live, we can see hour by hour what’s happening.”

The EPA has noticed a particular elevation of levels on winter evenings between 5pm and 6pm as people start to light fires.

“What we need to consider as a country, is to look at the feasibility of not just banning smoky coal in urban areas, but also all smoky fuels, that would be all solid fuels which emit particles above a certain level.”

The ban on smoky fuels introduced in Dublin 1990 had been very effective, she said and had saved over 10,000 lives in that period. “A national ban would be the easiest to implement.”

But that promise has given rise to a legal difficulty and has been challenged by coal distributors from outside the jurisdiction who have said such a ban would discriminate against smoky coal and give a competitive advantage to other smoky fuels such as turf and wood, both of which are in widespread use.

Former environment minister Richard Bruton said that that was an issue and his plans to widen the ban were delayed.

In tandem with the commitment to ban smoky coal, the Government also intends to publish a clean air strategy by the end of 2020. The key ingredients are a regional approach to air quality, a new approach to clamp down on the sale of high sulphur content fuel imported form the UK, and more air monitoring stations.

Environmental groups have called for a nationwide ban on all smoky fuels, including peat and wood. The difficulty with that is that the poorest and most vulnerable groups in society rely on solid fuel for heating more than any other group, and some workable alternative clean heat source would have to be made widely available.