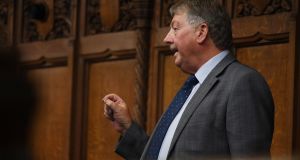 A DUP Stormont minister has said the rules apply to everyone after one of her Westminster colleagues was pictured not wearing a mask on a train. Photo credit should read: UK Parliament/Jessica Taylor/PA Wire

A DUP Stormont minister has said the rules apply to everyone after one of her Westminster colleagues was pictured not wearing a mask on a train.

East Antrim DUP MP Sammy Wilson said he should have had a face covering on, “and am offering no excuse”.

A photograph was posted on Twitter on Thursday of Mr Wilson on board a train, reading a magazine without a face covering.

Ms Dodds said she supports the view of former DUP MLA Jimmy Spratt who earlier said he was furious over Mr Wilson not wearing a mask.

She told the BBC: “Sammy has recognised what he did was wrong and the consequences are there for him, but it is incumbent upon all of us, public representatives and everyone else, to obey the health rules and very clearly in public where we are asked to wear a mask, to wear a mask.

“I am not making any excuses for anybody on this issue. I think that we should all obey the rules and ensure that we are safe, that our friends and colleagues are safe and that people like Jimmy who have been through incredibly difficult times will feel safer.

“Sammy also has acknowledged as far as I’m aware, although I haven’t been speaking to him directly.”

Mr Spratt, who is battling cancer, said Mr Wilson should “wise up” in a tweet.

He has also urged Mr Wilson to be “more responsible”.

“Sammy is a very senior MP. He’s a former colleague of mine in the Northern Ireland Assembly, and I expect more from a public representative particularly at this time when the advice is to do the right thing and to protect others,” he said.

“I am absolutely furious because it’s not the first time he has done a stunt. I feel he needs to be much more responsible and to toe the line, do the right thing and try to protect everyone if he doesn’t want to protect himself.

“Whenever I sit two days each fortnight in the cancer centre and see other people who are much more vulnerable than me, I think to myself: ‘I want to protect them, so why shouldn’t Sammy do the right thing and protect others?”

On Thursday, DUP leader Arlene Foster said everyone is ‘equally subject to the law’.

In a statement to the PA news agency, Mr Wilson queried why the person who took the photograph had not approached him directly on the train.

“I didn’t have a mask on, should have had it on and am offering no excuse, but it is sad that we have now become like East Germany under the Stasi where members of the public think it is acceptable to act as snoops,” he said.

“Whoever took the picture didn’t approach me or say anything to me which I suppose would have been the proper way to behave.”

Alliance Party leader Naomi Long criticised this statement, tweeting: “The phrase you were looking for is ‘I’m genuinely sorry and will do better in future’. And maybe leave out the whole East Germany/Stasi/blame the public thing. It was your fault and wearing a mask really isn’t comparable to that level of oppression.”

There are exemptions for the rule on the basis of age, health and disability reasons.

Earlier this week, Conservative MP Danny Kruger apologised after being spotted without a mask during a public transport journey in London.

Mr Wilson has previously been outspoken about the wearing of face coverings.

In July he tweeted a photograph of himself in an ice cream shop in Co Antrim not wearing a mask, with the message: “You can’t eat ice cream when you’re muzzled!”