Traffic figures for Dublin ‘slightly down’ on pre-Level 3 restrictions 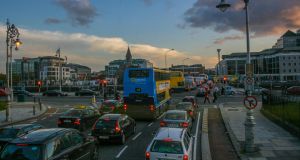 TII said the decreases ‘may reflect the impact of the Level 3 restrictions introduced at the weekend’. File photograph: iStock

Traffic volumes on main roads around Dublin are “slightly down” on pre-Level 3 Covid restrictions introduced in the Capital last week, according to a traffic analysis from Transport Infrastructure Ireland.

From Saturday new, Level 3 restrictions for Dublin stipulate domestic travel should be confined within Co Dublin, with exceptions only for essential purposes, work and education.

The subsequent analysis, compiled by Transport Infrastructure Ireland (TII) from vehicle counters set in the roads, shows weekday car traffic volumes fell by between 4 per cent and 8 per cent in the early days of this week, compared to volumes one week ago.

The fall is considerably less than the 70 per cent fall in traffic observed by the CSO during the initial lockdown ban on all non-essential travel, which began in March.

But in its analysis of the traffic volumes on radial and arterial roads around the capital, counted on Wednesday this week, TII said levels were “slightly down” when compared with the previous Wednesday, before the Level 3 restrictions were introduced.

TII said the fall of about 4 per cent was consistent with the reduced level of car traffic recorded on other radial routes out of Dublin.

In a conclusion the roads authority said the decreases “may reflect the impact of the Level 3 restrictions introduced at the weekend”.

TII said September was traditionally a very busy month for the State’s roads. Therefore while volumes of traffic on many arterial routes out of Dublin last Thursday and Friday were in excess of average daily traffic levels in 2019, it could be misleading to compare daily traffic figures for this September, with annual averages for last year.

A spokesman said many busy days throughout September or October this year would exceed annual averages for traffic volumes in 2019.

Overall, car traffic this week is typically down by between 18 per cent and 28 per cent of the volumes of one year ago, according to TII’s analysis of a sample basket of counters.

TII said following the 70 per cent drop in volumes of cars on the State’s roads in March this year, numbers had risen again to about 90 per cent of last year’s levels in the first three weeks of September. It said the slight fall back in those levels this week, was likely due to the new restrictions.

In the case of the regional cities the change in car traffic volumes on Wednesday as compared with Wednesday 16th September is as follows:
– M7 Limerick up 3 per cent
– N40 Cork up 0 per cent
– M9 Waterford 0 per cent
– N6 Bóthar na dTreabh Galway down 3 per cent

Numbers of passenger journeys on subsidised public transport, which includes Dublin Bus, Dart and Irish Rail, fell from 470,702 passengers on Friday September 18th before the Dublin restrictions, to 355,242 on Monday after the restrictions.

Overall public transport journeys numbered just under one million a day in March to between 50,000 and 100,000 in April, according to figures from the National Transport Authority. By April and early May, Luas usage had shrunk to as low as 3 and 4 per cent of its late February level. On March 10th, it had almost 142,000 passenger journeys compared to just under 5,500 on April 18th (a Tuesday and Saturday respectively).