If Gerry Adams does take a civil case he could be in for ‘six-figure’ sum, according to rough legal estimates 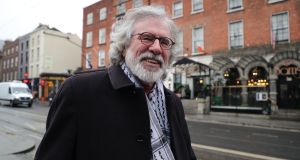 It would be surprising if Gerry Adams did not seek recompense. Photograph Nick Bradshaw for The Irish Times

Gerry Adams, after his convictions for attempting to escape from the Maze or Long Kesh prison camp in 1973 and 1974 were quashed by the London Supreme Court, said that the matter of seeking compensation was “maybe work for another day”.

The fact however that the court decision was unanimous would indicate that if he does take a civil case he could be in for a sizeable sum, possibly “six-figure”, according to some rough legal guesstimates. It would be surprising if he did not seek recompense.

In a sense he now has an absolute clear record. He was interned for sure but that incarceration was without trial. He still says he was never in the IRA and he does not have any conviction for membership.

It was to be expected that some of the reaction to the ruling was jaundiced, as reflected by comments from Ulster Unionist Party leader Steve Aiken who said, “Once again IRA victims will be left dismayed and angry by a judicial decision as Gerry Adams continues to lead what can only be described as a peculiarly charmed life at the hands of the British state.”

Said DUP MP Gregory Campbell, “Whatever this ruling might mean for Gerry Adams’s bank balance or his own conscience, the one thing no court can undo is the torment, heartache, bloodshed and broken homes caused by the PIRA in the 1970s.”

Traditional Unionist Voice leader Jim Allister also pitched in with the comment that Mr Adams was benefiting “from the British legal system whose judges the Provos brutally murdered – no right to life for IRA victims but a right of appeal for Adams”.

That will hardly bother the former Sinn Féin leader who can dismiss the reaction as unionist sour grapes.

The story will move onto the legal significance of the judgment, and, according to Mr Adams’s solicitor Seamus Collins and another Belfast solicitor Kevin Winters, it could have implications for hundreds of former internees.

Internment without trial, called Operation Demetrius, was introduced in Northern Ireland by the Stormont unionist government early on the morning of August 9th 1971. It was designed, said the then unionist prime minister Brian Faulkner, to smash the IRA. As generally acknowledged it had the opposite effect, serving as a recruiting operation for the organisation and alienating nationalists.

It ran until the end of December 1975 with close to 2,000 people interned, about 100 of that number estimated to be loyalists.

Mr Adams won his case because the Supreme Court judges ruled that the interim custody order used to initially detain him in July 1973 was not authorised by the then Northern Secretary Willie Whitelaw, as was legally required.

“There are implications for a significant number of people and I am in no doubt that lawyers like myself will be contacted in the coming days and weeks by former internees,” said Mr Collins.

He said however that to make their case they must provide their detention orders to assess whether the Northern Secretary had personally authorised their internment.

That was not difficult to do in Mr Adams’s action because of the court records relating to his attempted escapes but could be problematic for others hoping to take cases, added Mr Collins.

Nonetheless Mr Collins said there was potential for numerous cases to be taken on the basis of the Supreme Court ruling.

Mr Winters also said the ruling “may impact on hundreds of other cases”.

His company has many former internee clients and he now would be examining whether this ruling strengthened their cases to seek compensation. “This opens up the door to revisiting the legal basis for all of the internment cases collectively, although the devil will be in the detail,” said Mr Winters.

“It will be all down to, did the secretary of state sign off on the detention papers and did he personally consider the material when making that determination?”