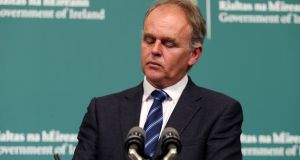 Minister for Education Joe McHugh has defended the use of school profiling in calculating Leaving Cert candidates’ grades in the face of criticism that it will penalise disadvantaged students.

Under its official guidance, the Department of Education says estimated marks from each school will be adjusted to bring them into line with the “expected distribution” based on previous years.

In angry scenes in the Dáil on Wednesday, Labour’s education spokesman Aodhán Ó Riordáin TD argued that this type of school profiling was fundamentally unfair.

“If I was an average student from a fee-paying school I’d be much happier today than I would if I was an exceptional student in a disadvantaged school because you will be assessed by the history of your school,” he said.

He called on the Minister to “just get rid of the school profiling bit”.

Mr McHugh, however, said it was a “disgrace” for Mr Ó Riordáin to make the claim and said the Labour TD was doing “an awful disservice to disadvantaged schools” by making such claims.

Mr McHugh insisted that it would be the schools who awarded the grades and not the Department of Education.

The row erupted during a debate on the impact of the coronavirus pandemic on the Leaving Cert exam.

The Minister said the calculated grades system being put in place by the Department of Education following the cancellation of the Leaving Certificate exams will allow students to move to the next stage of their lives “in a timely fashion”.

A special unit is being established in the department to give all students the option of a calculated grade for the 2020 Leaving Certificate, Mr McHugh said.

Official guidance is due to be issued to teachers next week, Mr McHugh said, followed by training on how to apply the new system.

He added that “it is crucial that it also guarantees them the right to sit the examinations at a later stage when it is safe to hold the exams in the normal way”.

It is understood that school managers, along with student and teacher representatives posed “hundreds” of detailed questions over how the new system will operate.

During Wednesday’s Dáil debate, Fianna Fáil education spokesman Thomas Byrne also called on the Government to make the “clearest possible statement” on schools re-opening after getting expert advice on the issue.

Mr Byrne said the World Health Organisation (WHO) has published guidelines on reopening schools “which aren’t maybe as restrictive as we may have been worried about”.

He said: “I think you need to have an absolutely clear message that you are doing everything possible to get our schools open in September at the appropriate time.”

Mr Byrne said “we need that continuity of education”.

“It’s simply not going to work on a long-term basis. It’s a giant social experiment at the moment.”

He said: “Our kids need to be back in class in September” and there must be the “clearest possible statement from government that they’re doing this”.

The Minister said “the advice from NPHET (National Public Health Emergency Team) is that schools will re-open in September, so we are working on that basis”.

He added that the advisory group on the re-opening of schools would be meeting on Friday. He said the group would look at the practices of other countries that had reopened schools and colleges and there would be a remote meeting of EU ministers on May 18th.

“ Access to schools will be allowed from Monday, 18 May. While this is not a return to work within the meaning of the protocol, it will allow staff to access the school where needed to support continuity of teaching and learning.”

The Minister told the House that the grading assessment “is the fairest, most equitable and just way to meet the challenges and a better way” to proceed in light of the coronavirus pandemic.

The cancellation of the Leaving Certificate exams and to move to predicted assessment was “one of the most difficult recommendations to Cabinet which a Minister has ever had to make”, he said.

He said: “It was my absolute preference to undertake the written and practical examinations.”

When holding the exams proved impossible “we developed a Plan B which moved the exams to July and August”.

But he said he received compelling evidence that the exams could not be held in a reliable and valid manner nor in a way that would be equitable.

“I was acutely conscious of the disadvantage that some schools faced and the impact that lack of time at school has had,” said Mr McHugh.

He said the requirement to protect public health meant that exams in July and August would not have been the experience which students had prepared for.

The examination would not be comparable to the Leaving Certificate in any other year, “potentially involving the need for students to wear masks and gloves, superintends requiring PPE and the prospect of the exam papers having to be redesigned to the extent that they would have been unrecognisable”.