Funeral held for Cork pensioner who fought armed robber in 2018 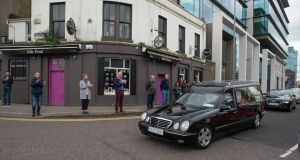 The hearse carrying the remains of Denis O’Connor pauses at The Idle Hour pub on Cork City docks, applauded by friends and customers, before burial in Kiskeam, Co. Cork. Photogtraph: Michael Mac Sweeney/Provision

A pensioner who drew international headlines when he fought off raiders in a bookies shop in Cork city in 2018 is being laid to rest on Wednesday.

Mourners engaged in social distancing lined the route as the hearse containing the remains of Denis O’Connor passed his son’s pub to go to his native Kiskeam for his funeral.

In 2018 the-then 83-year-old great-grandfather rushed to help staff and took on three armed men who were trying to rob a bookies.

Mr O’Connor, a father of five who lived in Glanmire in Co Cork, was in Bar One Racing in the area on September 15th, 2018, at about 6pm when three men in their teens or early 20s came in armed with hammers and a shotgun demanding money from the safe.

Two men, who were wearing balaclavas, jumped over the counter and attacked the manager. A third man carrying what appeared to be a shotgun held up the customers.

Mr O’Connor, who trained regularly in a Cork gym and walked and swam several times a week, immediately went to the aid of the manager, Tim Murphy.

He tackled one of the men, and the raiders left empty-handed.

In an interview with the Irish Sun at the time he said he didn’t think twice abut assisting the manager.

“I just didn’t think about what I was doing. Sometimes you can just sit down and do nothing or you can stand up to people like these and that’s what I did,” he said.

Mr Murphy said the robbery, which was caught on CCTV footage, was quite shocking. He said the young men, who were shouting and bashing their hammers, ignored the till takings and demanded he open the safe.

He described the situation as “intimidating”.

Meanwhile, Mr Murphy gave radio and print interviews where he said he was extremely grateful for the actions of Mr O’Connor.

“I was just being threatened by the two fellas with the hammers. Denis tackled one of them and I thought ‘I will have to tackle this fella as well.’

“I tried to grab the hammer. It was a total blur. They totally backed down. I remember Denis just shouting: ‘Ye are cowards. Ye are total cowards.’

“Denis is a total hero. When I saw him taking one of them on he totally inspired me. He is very fit,” Mr Murphy said.

Mr O’Connor, formerly of Kiskeam and London, is survived by his wife Teresa and his children Mary, John, Elaine Katrina and Clare. He will be laid to rest in Kiskeam following a 2pm funeral mass at the local church.

John O’Connor, son to Denis, is the owner of the Idle Hour pub in Cork city.

Up to 300 customers and friends lined the road outside the pub from 11.45am today to pay their respects as the hearse containing the octogenarian passed.