Chief Medical Officer Dr Tony Holohan says he is concerned that contacts per Covid-19 case will be driven up should people attend social gatherings during phase one of the easing of coronavirus restrictions. Video: RTÉ 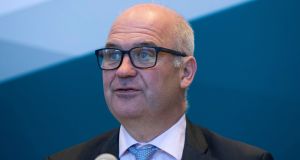 The possibility of schools reopening earlier than planned was dismissed by the State’s chief medical officer as he played down the Taoiseach’s enthusiasm that it could happen sooner.

Dr Tony Holohan rejected any view that there there was “mounting evidence” showing that children do not appear to be super spreaders of the coronavirus as previously thought.

Taoiseach Leo Varadkar said earlier on Wednesday that reopening schools for children was “among the safest things” that the State could do, pointing to a report by State regulator, the Health Information and Quality Authority, and comments by WHO official Mike Ryan.

“The emerging evidence is that among the safest things that we can do over the next couple of months is to reopen our schools and to reopen our childcare facilities to allow children to return to education and to return to normal life,” Mr Varadkar said.

Later, Dr Holohan said that there was “a very small number of studies” involving “small numbers of children” and insufficient evidence to change advice on the reopening of schools.

He told the Department of Health’s evening briefing on the Covid-19 epidemic that the State’s National Public Health Emergency Team would be meeting on Thursday to consider whether the first wave of the lockdown relaxations could be proceed as planned next Monday, May 18th.

He was “not anticipating at this moment” any changes on schools reopening before planned at the start of next school year from September or in the advice that NPHET would give on that.

“It is an entirely different thing to conclude in policy terms that we have enough evidence to say that transmission from children doesn’t occur but as yet it hasn’t been identified as a significant issue in the small number of studies that have been done.”

The deaths of another 10 patients from Covid-19 were announced by National Public Health Emergency Team at its briefing on Wednesday. There have now been 1,497 Covid-19 related deaths in the State.

There were 159 new cases of Covid-19 confirmed bringing the total number of cases confirmed over the course of the pandemic to 23,401.

The median age of confirmed cases is 48 years, according to data from the Health Protection Surveillance Centre (HPSC). Fifty-seven per cent are female and 43 per cent are male.

Thirteen per cent of cases, a total of 3,050, have been hospitalised, with 389 cases admitted to ICU.

Community transmission accounts for 60 per cent, close contact 37 per cent and travel abroad 3 per cent. Eighty-four per cent of people have recovered from coronavirus.

Earlier, the Government has signalled its concern at the increasing numbers of people in the population who feel the worst of the Covid-19 pandemic is over. Research conducted for the Department of Health showed that 43 per cent now believe the worst has passed, which might lead to less adherence to social distancing rules. “We have so far avoided a situation where the system is overwhelmed,” said Liz Canavan of the Department of An Taoiseach at the Government press briefing on Wednesday. “We need to be conscious of the devastating impact of Covid-19. The risk is still there.”

She pointed to the World Health Organisation opinion that the virus will recur in waves. She said that even when restrictions were relaxed the public should continue with safe practices as there will be periods when numbers will increase again. “The public are asked to stay the course,” she said.

Ms Canavan pointed to more positive figures from other research conducted this week that showed a marked increase in the number of people who will use sanitiser (up to 71 per cent from 59 per cent); who will sit further apart in future (up to 61 per cent from 36 per cent) and who intend to stay at home (up to 34 per cent from 6 per cent). She also said that over 90 per cent were washing their hands regularly and standing the required distance apart in queues. She added that 78 per cent of respondents now said they coughed into their elbow and adhered to the guidance on coughing etiquette.

Meanwhile, the prolonged period of dry weather has led to the possibility of water shortages, the Government has said. In the daily briefing at Government buildings, households were asked to introduce measures to conserve water. The conservation advice does not apply to hand-washing with people being advised to wash their hands as regularly as they can. That should have priority over less essential uses of water.

Ms Canavan said that households should avoid using power washers, use watering cans rather than hoses in gardens, and also to fix leaky taps. She said that Irish Water had issued guidance for households, businesses and farms on how best to conserve water.

In addition, over 20,000 people have been Garda vetted for specific Covid-19 roles in the health and other sectors since March 12th. The Government said yesterday that a total of 21,500 vetting applications had been processed by An Garda Síochána. The current turnaround time for vetting is one day and there is no backlog of applications at this time.

At a Government briefing, it was also disclosed that the Garda has invoked the Covid-regulation a total of 192 times since March. That includes arresting people for not observing the emergency laws, as well as taking names and addresses of those who have failed to comply with the rules. The Garda continue to report a very high level of compliance throughout the State.