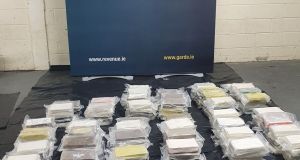 Gardaí and Revenue customs officers have made one of the biggest drug seizures in the Republic for years after cocaine valued at €12.04 million was discovered in Co Cork on Thursday.

More than 170kg of the drug was seized in container freight on arrival at Ringaskiddy Port.

Officers from the Garda’s Drugs and Organised Crime Bureau and Revenue’s Customs Service found the 172 kg of cocaine during a search of a refrigerated container of fruit aboard the Maersk Nimes at Ringaskiddy Port.

Garda search teams and customs rummage teams, using an X-ray scanner and assisted by sniffer dog, Marley, uncovered the drugs after searching several of the 40 foot containers aboard the ship.

The drugs were found aboard the 210 metre long freighter which arrived in Ringaskiddy on Wednesday after an eleven day voyage across the Atlantic to Cork from Central America.

The Maersk Nimes, which is registered in Hong Kong, had departed the port of Moin on Costa Rica’s Caribbean coast on February 6th bound for Cork with a cargo of fresh fruit for the Irish market.

Local Garda scenes of crime officers in Cork have been dispatched to Ringaskiddy to preserve the scene and to carry out forensic examination of the drugs for fingerprints and DNA evidence.

Customs officers have checked the ship’s documentation to see where the container originated while gardaí have spoken to the captain and crew to see if they can assist them in their enquiries.

Gardaí are remaining tight-lipped about the intelligence-led operation, but it is understood no arrests have been made so far in relation to the seizure.

While this is one of the largest seizures of drugs in the Republic for a number of years, it follows a noted trend over the last 12 months involving multimillion euro seizures of drugs and cash linked to the drugs trade.

“The drugs were discovered following an intensive search of containers that arrived on a vessel from Central America,” Garda Headquarters, Phoenix Park, Dublin, said.

Assistant Commissioner John O’Driscoll, who is head of the Garda’s Organised and Serious Crime section, said the seizure reflected how law enforcement agencies could combine in the Republic “in tackling importation of controlled drugs that harm our communities”.

“The Garda Síochána will continue to work with others at a national and international level in targeting the importation and supply of illicit drugs and the organised crime gangs that benefit from such activity,” he said.

Mick Gilligan, director of Customs Drug Law Enforcement, said working with the Garda to combat drug trafficking into the State was a priority for Revenue.

“Today’s seizure of cocaine will have a significant impact on organised crime and demonstrates the hard work that is undertaken every day by Revenue’s Customs Service and An Garda Síochána in confronting this threat”.

While the Covid-19 pandemic has had a very significant impact on the night time economy in closing all nightclubs and most pubs since last March, Garda sources have told The Irish Times the drugs trade has proven very resilient.

The Garda’s Drugs and Organised Crime Bureau seized drugs valued at more than €36 million in the first 11 months of last year, compared to €21.3 million in all of 2019.

Last year to mid November, the most up to date data available, gardaí had seized €16.35 million in cash, mostly from drugs gangs. That was more than double the amount seized in recent years. In 2019, €7.44 million in cash was seized by gardaí, while the figure for 2018 was €7.19 million.