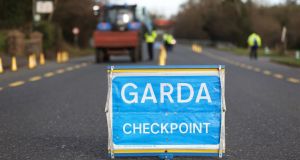 A Garda checkpoint on the Irish Border between Emyvale and Aughnacloy. File photograph: Liam McBurney/PA Wire

The Garda and PSNI have staged a ground and air operation along both sides of the Border focused on organised burglary gangs and those who exploit the Border to evade capture, with lower-level offending also targeted.

A total of 17 arrests were made in the operation on Wednesday, five in the Republic and 12 in the North, while vehicles and drugs were also seized.

In the Republic all five arrests were made for drink- and drug-driving and drugs were found during three drug searches. Gardaí also seized three vehicles for breaches of road traffic legislation.

One of the suspects, in his 40s, was arrested after suspected heroin, cannabis and amphetamines were seized in Clones, Co Monaghan.

In the North, as well as the 12 arrests, there were also eight drug seizures, and three vehicles were seized by the PSNI.

The operation was carried out by a Joint Agency Task Force, which is the designation given to co-ordinated cross-Border operations involving the Garda and PSNI provided for under the Fresh Start Agreement in 2015.

Crime along the Border has proven challenging as gangs who operate in the region can flee into the other jurisdiction in the knowledge pursuing gardaí or PSNI officers cannot follow them. Co-ordination between the two forces during live operations is usually very difficult.

In the North some regions beside the Border remain especially challenging for the PSNI given the continued security risk to police personnel operating there, with that situation effectively a hangover from the Troubles.

The latest Joint Agency Task Force operation was carried out at different locations across the full length of the Border, and involved the Garda helicopter in the Republic.

The Garda North Western Regional Armed Support Unit was also involved, as well as regular policing units, detectives and roads policing units in Louth and the Garda divisions of Cavan-Monaghan, Sligo-Leitrim and Donegal.

Det Supt John O’Flaherty of the Garda’s North Western Region said the operation was aimed at detecting organised gangs and all forms of rural crime, and generally increasing community safety.

“An Garda Síochána is acutely aware that rural crime has the potential to cause serious harm to local communities and with our colleagues in the PSNI we are committed to working together to ensure we keep everyone safe on both sides of the Border,” he said.

“Last evening’s operation forms part of our continued efforts to disrupt the movements and activities of organised crime gangs and works to reduce and prevent criminal activity in Border areas.”