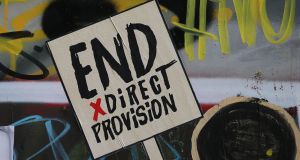 Residents at the direct provision centre in Glounthaune, Co Cork, claim most meals are being thrown away ‘due to the low standard’ and accused the centre of serving burned food and using old oil for cooking. File photograph: Nick Bradshaw

A group of direct provision residents in Co Cork have started refusing to eat meals prepared in the centre, saying the food is not nutritious enough for children and that they should be able to cook their own meals.

Residents at Ashbourne House in Glounthaune outside Cork city say they are “boycotting” meals and have called on management to provide raw ingredients so they can cook their own “healthy” dishes in the building’s kitchen.

The group contacted Minister for Children and Equality Roderic O’Gorman earlier this week, requesting that his department intervene and introduce a “points-based system” which would allow residents to purchase their own food and prepare it in the centre.

In a letter sent to the Minister, residents claim most meals are being thrown away “due to the low standard” and accused the centre of serving burned food and using old oil for cooking.

The residents write that 80 per cent of people living at the centre use their weekly asylum allowance to buy their own food as the meals on offer “is not what our children and people with medical conditions can eat”. They also receive food ingredients from local charities, they add.

Ashbourne house residents started refusing meals on Monday and have threatened to escalate to a full hunger strike if their requests are not met. In the meantime, they are using their weekly stipend to purchase food from outside the centre. “Food is essential so Covid restrictions should not affect provision of point-based system and cooking facilities within a month,” wrote the group in the letter seen by The Irish Times.

A spokesman for the Department of Children confirmed that the Minister had received the letter and that the International Protection Accommodation Service (IPAS) had contacted the centre’s management.

“The department takes complaints from residents very seriously,” he said. “IPAS will be conducting a clinic on Monday the 22nd of February for residents in the centre to allow them an opportunity to elaborate further on their concerns so that IPAS can take whatever remedial action may be required.”

One resident told The Irish Times that families at the centre had been asking for “self-catering points system” for years and that the “majority” of residents joined the boycott earlier this week after meeting with management to discuss the demands.

“The food they offer is pasta and rice, it’s often deep fried and there’s no nutrition for growing children. We’re not ungrateful but the food they’re cooking is for Irish people and we are different nationalities. We get one piece of fruit per person per day, I’m sure children should be eating more than this.”

The resident also noted that under the State’s national standards for accommodation centres, which became legally binding in January 2021, residents should have the option to cook their own food.

A letter distributed to residents last weekend by management acknowledged that the centre was behind schedule in providing a self-catering model due to the “unprecedented circumstances” of the pandemic but that it was “continuously arranging works that can be done to continually upgrade rooms and common areas were possible under public health guidelines”.

A second letter from the engineer leading renovations at the centre noted that any outstanding work on the kitchen area would be completed once lockdown is lifted.

An email from the Movement of Asylum Seekers in Ireland to the Minister, sent on Wednesday, said it had received “disturbing reports that some asylum seekers in Ashbourne House have resorted to using their €38.80 weekly allowance to buy food” and called on the department to engage with the centre’s management and residents to resolve the matter.