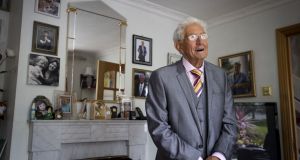 Sil Fox: ‘I feel like I’m in limbo land. I haven’t worked since then.’ Photograph: Tom Honan/The Irish Times.

Veteran comedian Sil Fox has launched a legal action in the High Court against the State over damages he claims to have suffered as a result of an unsuccessful prosecution for alleged sex offences.

Proceedings arising out of the failed sexual assault case were issued on Thursday against the Director of Public Prosecutions, the Commissioner of An Garda Síochána, the Minister for Justice and Equality, the State and the Attorney General.

The case against the 87-year-old was dismissed on May 27th 2020 in the Dublin District Court, because of discrepancies between the complainant’s account of what happened on the night in December 2018, when she approached him in a Dublin bar for a selfie, and CCTV footage of the incident. The judge found there was “no indication that something untoward occurred” in the footage.

“It has ruined my life. I’m not the same Sil Fox. I’m even attending doctors still with depression. I couldn’t believe that I could be charged with something I didn’t do,” said Mr Fox, who will be 88 next month.

“I feel like I’m in limbo land. I haven’t worked since then. I’m feeling very down. I don’t think my life will ever be the same again,” he said, speaking at his family home in Templeogue, Co Dublin on Thursday.

“Fifty years of making people laugh, and I’ve never done anything wrong, never in court, never accused of anything. The biggest shock of my life is when I was charged.”

Now, he said, he wants answers. “Why did they take this case? I knew I didn’t do anything wrong. Had they looked at the CCTV, they wouldn’t have put me through this. An 86-year-old man, and I had to go to court during the Covid, and my names through all the papers, it was a terrible, terrible time in my life.”

Why, he asked again, “did the DPP go ahead with this?”

Legal documents filed on his behalf claim the unsuccessful prosecution was a breach of his constitutional right to a good name, and that it recklessly inflicted emotional distress on him. His legal team claims that Mr Fox “suffered serious reputational damages arising from the false allegations, in circumstances where any reasonable consideration or review of the CCTV evidence would militate against a prosecution.”

At a preliminary hearing in July 2020, his application for anonymity or reporting restrictions was turned down, resulting in “considerable adverse publicity for the Plaintiff, who was pictured and named in several leading publications along with details of the charges,” according to the writ.

“I don’t know will I ever get back to the Sil Fox that I was. I’m hoping I will, but it’s going to take a long time,” Mr Fox added.

“He’s still devastated. We’re trying to keep his spirits up all the time,” said his son, Cyril Fox.

Body of third man found near where two brothers killed on Co Cork farm 12:44
Jack and Grace most popular baby names in 2020 12:26
HSE ‘recalibrated’ due to Covid-19, says chief clinical officer 10:17
‘A lucky escape’: Woman rescued from sinkhole in sea off west Cork 07:34
Locals rally to help after GP’s surgery destroyed in fire ahead of vaccine arrival 01:00