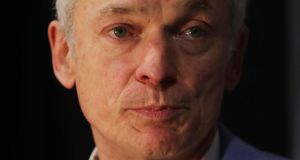 Richard Bruton has been unanimously elected as the new chairman of the Fine Gael parliamentary party.

Mayo TD Alan Dillon was elected party secretary and Dublin Mid West deputy Emer Higgins will serve as the party’s assistant secretary. Sources present at the meeting said Mr Bruton, who served as minister for communications, climate action and environment in the last government, gave a speech emphasising the importance of focusing on policy and maintaining Fine Gael’s separate identity within the current coalition Government.

He spoke of his experience in serving in three coalition governments during a career that took in several cabinet positions, including as minister for education, and minister for jobs.

In a statement last night, Mr Bruton said the coronavirus pandemic had “shown Fine Gael at its best, displaying competence and sensitivity in protecting the people who are most exposed to risk by this awful virus. It is my aim our parliamentary party adopts a new way of working as a team, so we can make this connection a permanent feature of our work.”

Ms Carroll MacNeill emphasised the importance of gender balance in politics. “We simply must ensure a more diverse representation than we have had before, and an obvious first challenge is gender.”

“Women are 50 per cent of the population and consistently underrepresented in our representative chambers. This parliamentary party will drive the recruitment of more women to run in future elections for Fine Gael.”

Alan Dillon said his new role was an “honour”.