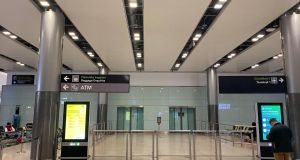 Shortly before 6am, the arrivals hall at Dublin Airport, usually thronged with people emerging from overnight transatlantic flights, is deadly quiet, with the small numbers onboard the four flights moving through quickly.

Arriving Americans appear highly aware of the guidelines for those arriving in Ireland from abroad, and happy to announce that they will be quarantining for two weeks ahead of any further travel.

Spike Wolf from Pittsburgh, who has flown from Boston, is fully aware of the rules. She is travelling on to Donegal to stay with a friend, where she will self-isolate for two weeks. Later, she plans “a little bit of touring”, though “mostly in Donegal”.

Simon Gillespie from Donegal, who arrives in with fewer than 40 other passengers from New York’s JFK airport – which was as empty as “a ghost town” – has already been directly affected by the pandemic, since it has cost him his job.

Having lived in New York for 10 years, Gillespie was laid off in April, and decided to come home for three weeks to see family. “I won’t be going to any social gatherings or anything. I’ll just be there with my family, because obviously we’re wary, you know? New York was an epicentre.”

Lori Schwartz and her husband are returning to Ireland. Normally, the two Americans live in Barna, Galway, but they flew back to the US in March to help care for an elderly relative.

Following several delays, they have finally made it back. “We cancelled our trip in May because of Covid-19, and thought 12 weeks would be plenty of time, but it wasn’t,” says Lois.

The journey back was quite straighforward, with immigration and other checkpoints “almost eerie”, she says. “We’re heading home now [to Galway] and then isolating. We’ll call Joyce’s or Tesco for the grocery delivery.”

Steven Beard from Virginia has flown from Washington DC via Newark to stay with his girlfriend and her family in Laois. He intends to quarantine for 14 days.

“We’re possibly going to Donegal then, I’ll be in the country about three weeks in total,” says Beard, who intends to work remotely while he is here. “I brought my laptop and another monitor, all these cables, a mouse, a keyboard.”

Claire Read from Tennessee studied in University College, Dublin until March, when she moved back to the US after the Covid-19 crisis broke. She has decided to come back, but will first isolate in Dublin for 14 days.

“They asked for a locator form. It’s just this form you print out before you come over. It asks where you’re staying just in case … for the contact tracing, I guess, and to make sure you quarantine for the 14 days.”

Tom Kavanaugh from New York has flown in from Newark to stay with family in Belfast. He is a regular transatlantic traveller. “There was 10, 15 on the whole flight.” The 14-day restrictions are “No problem. I’ll be staying the distance.”