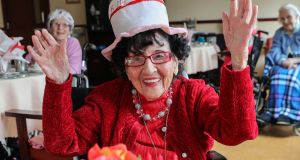 Few can say they have lived through two pandemics. Not only can Josephine Silo lay claim to that achievement but, celebrating her 104th birthday on Wednesday, she can say she survived.

In a north Dublin garden, a handful of family members gathered to celebrate her latest milestone, just a few months after her recovery from Covid-19.

“At this stage I reckon she is going to outlive all her nieces and nephews because there isn’t actually anything else I can say is wrong with her apart from [reduced] eyesight,” says Anna Colfer, one of those nieces, who explains how her aunt’s recovery from coronavirus had mystified many.

Ms Silo was one of a number of early Covid-19 cases at the Sacred Heart Nursing Home in Raheny, Dublin but suffered only mild symptoms - loss of taste and smell, a persistent cough.

She recovered for the main part after a few weeks but still suffers reduced appetite. Her poor eyesight prevented her from clearly seeing staff in their protective clothing and she was not initially told she had contracted the virus.

“Her outlook on life was: I have lived my life and I am ready to go,” says Ms Colfer, who describes her aunt’s religious devotion and her belief that God had simply spared her.

Somewhere though, there was an acceptance that death was nearby given the sheer length of her life. Born in July, 1916, she was a toddler when the Spanish Flu swept across the globe killing tens of millions of people.

She was in her early 20s when Hitler marched into Poland; her early 50s when Neil Armstrong stepped on the moon; and had turned 73 just before the Berlin Wall came down in 1989.

A Dublin native, Ms Silo was born on the Shelbourne Road, the second youngest of six siblings. She moved to Rathmines as a child and eventually to East Wall where she became a beloved addition to the local community before moving to her nursing home.

“I know she has to die at some stage but I seriously don’t know what is going to take that woman out,” jokes her niece. “She can’t understand why [she is] still here.”

At the Sacred Heart on Wednesday, well-wishers celebrated over cake and presents before a small family gathering at a relative’s house. By this stage Ms Silo is surrounded by extensive family, right down to great, great grand nieces and nephews.

With two pandemics bookending an enduring life, she tells people her time will come when God deems it so : “He knows where I am.”