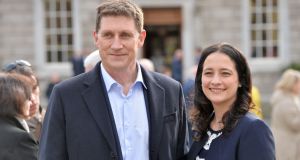 Green Party leader Eamon Ryan has won the leadership contest seeing off the challenge of Deputy leader Catherine Martin by a narrow majority.

The narrow margin of victory was a surprise and will pose questions about the durability of Mr Ryan’s leadership and show that the party is divided as to his leadership.

Mr Ryan in his speech said he was very glad to have been re-elected.

“It was a really close result. There is no two ways about that. The result could have gone either way. I will reflect on that,” he said.

He said the party was not hierarchical and that he would work in tandem with Ms Martin.

“I don’t think it’s an impossible job. It is tough. Our job is tough but we are in government,” he said. “Our party is fit for that.”

He said the contest was not divisive, but it was a very difficult time because of the Covid emergency.

“We have a big job in organising our own party. We have a convention planned in October. We have work to do there to put our own systems and process in place to reconcile differences.”

Ms Martin pledged to support Mr Ryan’s leadership in her concession speech, but her strong showing has put in her a very strong position.

She said the party lost some members on Thursday and would need to sit down and critically look at why the party has lost some new members.

“We need to embrace the diversity of opinion and challenge each other on the new journey we are on – to show the party that all those voices are important,” Ms Martin said.

She said she was asking people to “stick to Eamon” as the leader.

A little under two thirds of Green Party members had voted in the leadership election when the deadline for polling passed at 5.30pm on Wednesday.

A total of 1,950 of 3,000 eligible members voted in the postal ballot, which will decide who will lead the party until the next general election.

There are 2,336 members in the Republic and a further 598 in Northern Ireland.

For last month’s vote each member who wanted to vote was required to register. Only a fifth of Northern members opted to register to vote in that poll, some because they lived in a different jurisdiction.

This time far more Northern Ireland members are expected to have voted, as it is an an all-island party.