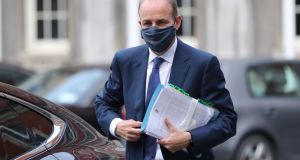 Taoiseach Micheál Martin: The centrepiece of the Government stimulus plan will be new employment supports based on a German scheme. Photograph: Niall Carson/PA Wire

The Government will announce its long-awaited stimulus plan on Thursday with a package of about €7 billion including capital spending, welfare and employment supports, grants and tax cuts.

In a boost to the domestic hotel and restaurant industry, the plan is expected to include a “staycation voucher” scheme where consumers will be able to claim a tax refund of up to €125 when they spend in the region of €600 on accommodation, food or non-alcoholic drinks.

A centrepiece of the plan will be the announcement of new employment supports based on the German “kurzarbeit” scheme, under which the State supports the wages of workers who have been temporarily put on short-time working, and which has been credited with keeping unemployment low during the pandemic, and during the financial crisis a decade ago.

Other details of the stimulus plan were still being finalised between the parties on Wednesday night with differences persisting between the Green Party and Fianna Fáil over a proposed reduction in capital gains tax.

The plan will include a huge injection of cash to revive the stricken economy through capital spending and grants, as well as a series of schemes to support businesses and workers.

Public investments will be targeted at a number of areas, including cycling and walking infrastructure, town centre investment schemes and programmes which are ready to be started soon in a number of State companies, notably Irish Water.

Every school in the country will be eligible for an enhanced minor works scheme worth tens of millions of euros, intended to fund structural alterations to classrooms and improve bathrooms to facilitate hand-washing.

The waiver on commercial rates will be extended until the end of September. There are also plans to allow firms warehouse part of their PAYE and VAT bills without attracting interest or penalties, though these liabilities will eventually fall due.

There will be a major revamp of the temporary wage subsidy scheme (TWSS), converting it into a permanent support to help businesses to retain staff. While the scheme will continue for a period to pay a large portion of the wages of staff in companies hit by the pandemic, it will be relaunched in the autumn to incorporate a longer-term scheme to help pay for staff in companies trying to trade their way back to profitability.

To put it on a permanent footing, it is understood that revenue is likely to be raised through an increase in employers’ PRSI , currently charged at 11.05 per cent on most earnings.

It is likely to be based on the German “kurzarbeit” – or short-time working – scheme, under which the State supports the earnings of people who have been put on short-term work during periods of economic difficulty. This measure is also aimed at dealing with the fallout from Brexit.

Tens of thousands of places on a variety of back-to-work schemes are being readied at a cost of €100 million, with the intention that these schemes come on stream as the pandemic unemployment payment is wound down.

The so-called “staycation voucher” scheme will see a tax refund of up to €125 being paid to consumers who spend in the region of €600 on accommodation, food or non-alcoholic drinks, and will be valid from this autumn until the end of April next year.

The restart grant for SMEs, capped at €10,000, will be increased and more companies and self-employed people will qualify.