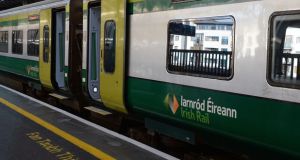 The Department of Transport said the study would consider including conventional rail, higher and high speed rail links along the route. File photograph: The Irish Times

The Government is to launch a study into a proposal to build a €15 billion high-speed train line from Belfast to Dublin and on to Cork and Limerick, the Minister for Transport Eamon Ryan has said.

The study would be “the most significant” review of the intercity network on the island since the strategic rail review in 2003, and would examine how it could operate with the existing broader network.

Mr Ryan said the Department of Transport would shortly launch “a significant procurement process” of about 500km of high-speed line from Belfast-Dublin-Cork/Limerick.

On Tuesday a spokesman for the department said that on foot of commitments in the Government’s national planning framework and national development plan, as well as under the New Decade, New Approach agreement made by the Irish and British governments to support the full restoration of the institutions of the Good Friday Agreement, it was proposed to conduct a study of rail speeds along the Belfast-Dublin-Cork/Limerick core corridor.

The new study would “take a strategic view on the potential of high-/higher speed rail to support the relevant national strategic outcomes of the National Planning Framework through developing high-level design and operational proposals” for the Belfast-Dublin-Cork/Limerick corridor, said the spokesman.

The Department of Transport said the study would consider including conventional rail, higher and high speed rail links along the route.

The spokesman for the department said that a procurement competition would be launched in the next few weeks, and that work on the study should commence by November.

The Irish Times understands that as part of the talks on the formation of the new Fianna Fáil, Fine Gael, Green Party government, the Department of Transport was asked about a potential rail link from Dublin to Derry that would also serve Navan and Letterkenny.

The Department of Transport said in response that it was not aware of any official feasibility study in relation to the development of a rail line from Dublin to Derry via Navan and Letterkenny.

“Therefore any estimates given are highly speculative and must be treated with extreme caution. In addition the costs below are purely related to construction costs only, and do not include the annual costs that would arise each and every year in relation to maintenance and renewal of the line and the operation of actual services on the line, both of which would require extensive Exchequer support.

“Based on an indicative range of €25 million to €30 million per kilometre and a distance of approximately 500km it is estimated that a Dublin to Derry rail link via Navan and Letterkenny could cost between €12 billion to €15 billion approximately. The final costs may include items beyond simple laying of track (such as compulsory purchase of land).”

Last December the former minister for transport Shane Ross said a review would be undertaken this year into the feasibility of reopening a rail line between Dublin and Navan.

Separately, official documents show that details about the cost of a potential rail line from Dublin to Derry via Navan and Letterkenny were sought as part of the recent talks on the formation of the new government.