Celebrating the bicentenary of John Tyndall, one of Ireland’s most influential scientists 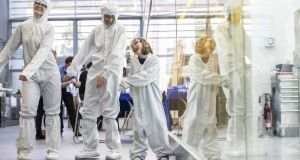 Like John Tyndall, who always underlined the need for science communication and engagement with the public, Tyndall National Institute in UCC has a major programme of science engagement in tandem with advanced research. Above public engagement and outreach officers Dr Caitriona Tyndall and Alida Zauers with Albi Morrish in the Tyndall Atrium adjoining the cleanroom during Culture Night. Photograph: Clare Keogh. 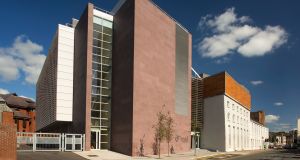 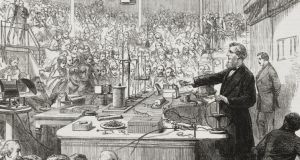 Professor John Tyndall lecturing at the Royal Institution, London in an illustration from the magazine The Illustrated London News, volume LVI, May 14th, 1870. Photograph: Getty Images.

The life of great Irish natural philosopher John Tyndall was summed up adeptly in 2018 when the publishers of a major biography of him issued a “12 things you didn’t know . . .” about the scientist, mountaineer and public intellectual.

It was compiled by Oxford University Press to promote Roland Jackson’s superb account of the life of the scientist from Leighlinbridge, Co Carlow, who ascended from a hedge school-type education to the pinnacle of 19th century science and counted among his friends and collaborators many of the best-known scientists of that time, such as Charles Darwin, Thomas Huxley, Michael Faraday and Louis Pasteur.

In less than 100 words, it encapsulates a life that goes far beyond scientific endeavour:

– The first person to camp overnight on the summit of Mont Blanc (1859);

– Established the physical basis of the Greenhouse Effect, underpinning our understanding of weather and climate change (1859);

– Explained atmospheric conditions that affect the transmission of sound (1874);

– Argued that scientific research should be free from all constraints of theology or religion (1874);

– Invented “Tyndallisation”, a process of sterilisation by discontinuous heating (1877);

In reality, the list could be five times longer. In The Ascent of John Tyndall, Jackson provides the context: “Tyndall is one of the most intriguing and significant figures of the mid-19th century. The outspoken Irish-born physicist and mountaineer, who rose from a humble background to move in the highest reaches of Victorian science and society, and marry into the aristocracy, is central to the development of science and its place in cultural discourse.”

He was a towering presence in Victorian Britain. His scientific reputation spread across the world. His mastery as a communicator and fearlessness in a cauldron of religion and politics, was a beacon for those increasingly guided by scientific proof. His philosophical position was aligned with materialism; that matter is the fundamental substance in nature, and that all things, including mental states and consciousness, are results of material interactions.

His most notable polemic was an address to the 1874 meeting of the British Association for the Advancement of Science in Belfast. He espoused scientific naturalism – the view that the natural world is best understood without invoking theological explanations, As Mary Mulvihill recalled in her book Ingenious Ireland, a storm erupted that pitched science against theology, the first time the Darwinian controversy really hit Ireland. “On the following Sunday, the ‘atomists’ and the ‘blasphemous professors of materialism’ were denounced from church pulpits.”

Yet in spite of all this, and Mount Tyndalls around the world that provide lasting memory of his mountaineering prowess, there is a deep sense he has not got due recognition. Some of his dedicated followers intend to provide timely reminders through a series of events in coming months, stemming from the 200th anniversary of his birth on August 2nd.

Tyndall was probably the leading Irish experimental scientist of the 19th century, according to Eoin O’Reilly, chief scientist at the eponymous Tyndall National Institute in UCC.

“Tyndall National Institute is named for him because so many of his key achievements are fundamental to the work we’re doing today, 200 years later. As one example, the insights from Tyndall’s work on sterilisation still play a key part in the running of our clean rooms.”

He provided the foundation science resulting in cleanroom techniques used in pharmaceutical and IT manufacturing. With the help of a beam of light, Tyndall demonstrated not only that dust in the air could contain germs and disease but also that a cotton-wool respirator could filter them out. He became an advocate for the germ theory of disease and the mass production of cotton-wool respirators.

More widely, Tyndall is known as the “grandfather of fibre optics”. He performed the first public demonstration of light being guided through a “light-pipe” – a narrow tube of water. “This is the principle underlying light propagation in the optical fibres that enable high speed data transmission for the internet, underpinning a significant part of the work undertaken in our multi-million euro photonics research programme,” O’Reilly adds.

Tyndall is also credited with discovering the molecular basis of the Greenhouse Effect, carrying out remarkable experiments that first demonstrated that gases in the atmosphere absorb heat to very different degrees; underpinning current understanding of anthropogenic global heating.

“Climate change is a key concern for Tyndall National Institute, where we are addressing societal challenges through deep-tech innovation. Our work in this area includes solar power, clean energy, smart buildings, and many further areas, all building on the very impressive legacy of John Tyndall and his scientific achievements,” O’Reilly believes.

While some of his individual achievements were really impressive and others incredible, he ascribes the lack of recognition to theoreticians from that period invariably grabbing the limelight; as reflected in the ideas of mathematicians William Rowan Hamilton and George Boole achieving prominence – “rather than those pushing experimentation”.

Tyndall was “a belt and braces person”, he notes, and endlessly experimenting. It was typified in his fascination with bacteria, and the story of him leaving bottles of urine at various levels going up a mountain and evaluating the samples coming down.

His copious diaries, notebooks and correspondence reveal the constant cleverness and persistence required to be an experimental physicist at that time.

Tyndall, a research community of 600 people of 52 nationalities, is a leading research centre in integrated information and communications technology (ICT) materials, devices and systems. It is one of Ireland’s national labs, specialising in both electronics and photonics. It works with industry and academia to transform research into products in core areas of electronics, communications, energy, health, agri-tech and the environment.

O’Reilly says Tyndall would be proud that a leading institution in the development of “deep technologies”, and their translation into widespread deployment beyond the lab, is named in his honour. And in particular, he would approve of their public engagement and outreach efforts – given his tremendous work in communicating science to scientific peers and public alike, notably through lectures given to the Royal Society, Britain’s elite scientific body.

Tyndall anniversary events start on August 2nd with “I Know Why the Sky is Blue, Do You? John Tyndall 200”, a livestream hosted by Carlow County Museum with his biographer Roland Jackson; Dr Julie Donnelly of Tyndall National Institute and Martin Nevin, a historian and authority on Tyndall. It will be chaired by the young environmental leader Alicia Premkumar, a climate ambassador for Carlow.

Scouting Ireland is to unveil a new badge celebrating Tyndall through appropriate science and environment achievements. There are plans for a John Tyndall mural in Cork; lectures, audience events and an exhibitions at the city’s Crawford Gallery. Carlow County Museum is hosting Artworks 2020, featuring artists who were invited to take inspiration from Tyndall.

During Science Week 2020 in November the Invisible Light exhibition will explore the electromagnetic spectrum in relation to history, society, creation and art conservation.

The full events listing will be live at https://www.tyndall.ie/news/tyndall200/