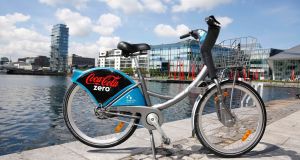 From next month, Dublin City Council plans to increase the Dublinbikes annual charge to €35, but not to raise per-trip charges, or the €5 three-day subscription. Photograph: Conor McCabe Photography

The annual membership charge for the highly-popular Dublinbikes rental scheme is to rise by 40 per cent from next month, Dublin City Council has announced.

The service, which has been operating in the city since 2009, is funded though subscription and usage charges along with sponsorship and advertising, with the council making up the rest.

The current annual charge is €25. Members can use a bike for free for the first 30 minutes. The next half hour costs 50 cent, with charges thereafter increasing on an hourly basis.

From next month, however, the council plans to increase the annual charge to €35, but not to raise per-trip charges, or the €5 three-day subscription, frequently used by tourists.

Saying that the charge for most members will be “less than 68 cent a week” after September 3rd, the council said 94 per cent of all trips last less than 30 minutes, so most users pay no more than their annual fee.

Saying the increases were “very short-sighted” given efforts to encourage cycling, Independent councillor Mannix Flynn said it was not “appropriate to be increasing the charge at a time when we are trying to get people out of their cars”.

Calling for an examination of the contract with JC Decaux, which operates the scheme on behalf of the council, Mr Flynn said: “They seem to be getting all the cream on the cake, without taking any expense.”

In a statement JC Decaux said the council sets membership fees, and they are used “in full to contribute the running” of the scheme, which has 1,600 Dublinbikes at stations.

The council had planned to expand the service to the city’s suburbs, beyond its current operations within the city centre, between the Royal and Grand canals, but income would not cover the extra costs.