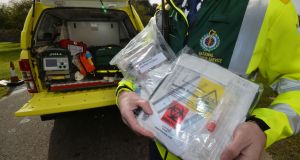 Only one in four of recent confirmed cases in Covid-19 occurred in Dublin, according to public health officials who say a regionalised approach to restrictions is not appropriate to Ireland.

Chief medical officer Dr Ronan Glynn said there was a “misperception” that the vast majority of cases to date have occurred in the Capital.

While this was true over the period of the entire outbreak, he said that in recent weeks only one in four cases have been recorded in Dublin.

A further 45 new cases of Covid-19 were reported by the National Public Health Emergency Team (NPHET) on Tuesday, of which 33 were in Co Kildare. Many are believed to be linked to an outbreak at a local meat processing plant.

Dr Glynn said the evidence did not support a “more nuanced approach” as Covid-19 moves quickly. A county can “look okay” and then experience a significant number of cases with no obvious link to other cases.

A regionalised approach to restrictions “sounds good in principle”, he said, and may work in large geographical areas. However, in small areas such as Irish counties, “it’s not that simple”, he told a Government briefing in Dublin Castle.

No further deaths were reported by NPHET on Tuesday, for the ninth day in a row.

Of the 45 new cases, 35 were in men and 10 were in women. Some 77 per cent involved people aged under 45. Aside from the 33 cases in Co Kildare, seven were in Dublin and five were spread across four other counties.

NPHET said 31 were associated with outbreaks or were close contacts of confirmed cases, and just four were identified as community transmission, for which the cause has yet to be identified.

Speaking at the briefing, Dr Glynn said the decision by the Government not to move to phase 4 of the lifting of restrictions was difficult but the right one.

While some indicators remained positive, such as the number of patients hospitalised, there has been a “concerning” increase in cases in the past seven days.

He said Ireland must ensure it is in the best position possible to tackle the pandemic, even if the recommendation would be disappointing to many.

“We don’t want to see stricter measures imposed,” he said, adding that “every effort” had to be made to contain the virus so schools can re-open as planned later this month.

People must ensure they do not “drop their guard” when at home, at the workplace or meeting people, he said.

Meanwhile, eight more positive cases of coronavirus have been detected in Northern Ireland over the weekend, the North’s Department of Health said on Tuesday. The total number of people who have been infected is now 5,996.

No new deaths were recorded, leaving the total at 556, according to official figure