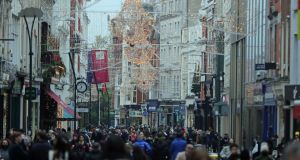 Ireland’s reopening following a six-weekend lockdown created a “fresh buzz” around towns and city centres on Tuesday morning with retail groups hailing “a spree” in earnest.

Early morning queuing gave way to a steady stream of shoppers over the course of the day with retail groups suggesting the indications were that retail sales for December 2020 would come close to matching the figures for the same period last year.

Retail Ireland said it anticipated total sales across the sector would be about €4.8 billion this year which is about €1.2 billion higher than other months of the year.

“I don’t think the level of trade this Christmas will be radically different from last year and that would be very positive given the scale of the crisis and the level of concern among consumers,” head of Retail Ireland Arnold Dillon said.

He suggested that based on the evidence of the first day of Level 3 restrictions, consumers were “showing really strong support for public health advice” with almost universal compliance with rules on the wearing of masks both in shops and outdoors when on busy streets.

He said retailers had noted one “striking change” in consumer behaviour.

“Shopping has become very focused and people know what they want and they are going in and getting it. They are not browsing as they would have done in previous years and that should allow retailers do the same level of business without the same level of crowds,” Mr Dillon said.

According to Retail Excellence, there were no indications from its members that crowds were an issue and it was apparent there was broad compliance with regulations governing face masks.

The head of the retail umbrella group, Duncan Graham, said there was “a buzz around the place and a real feel-good factor seems to be back”.

He said footfall was as he had anticipated, and town and city centres were busy while he described trading in shopping centres such as Dundrum Town Centre as “brisk”.

Mr Graham echoed the comments made by Mr Dillon and said consumers were by now accustomed to restrictions and the need for social distancing and the wisdom of avoiding crowds. “I think people are now accustomed to the multi-channel shopping experience and they know that if they want to avoid physical shops, they can either click and collect or shop online.”

He suggested that extended opening hours across many retailers in the run-up to Christmas would make consumers feel more secure as they shopped at a time of their choosing.

He also pointed out that while broad swathes of the retail sector were reopening, the country had moved to only Level 3 which meant that travel between counties for non-essential reasons was not permitted.

“I think that is going to give regional shopping a real bounce in the next couple of weeks, and towns around the country will be busy,” Mr Graham said.

He suggested that might come at a cost for the traditional retailing magnets of Dublin city centre and large shopping centres on the outskirts of the capital which would normally be hugely popular for people in neighbouring counties.

“I think on December 18th when the levels change again and travel between counties is allowed, we will see places like Grafton St and the Dundrum Town Centre get busier,” he said.

Traffic in Dublin and Cork cities was “noticeably busier” with “substantial levels of traffic” on the roads by 9.30am, said spokesman Barry Aldworth.

He said he expected traffic volumes to pick up “gradually” over the coming days and, from December 18th, roads would get busier.