After being closed for 15 months, one Cork gym is welcoming customers again 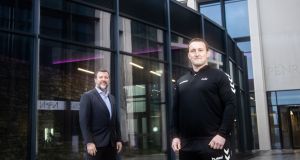 Emmet Foley, developing manager at Penrose Dock, of the JCD Group, and Luke Dennehy, founder of Dennehy’s Health and Fitness in Penrose Dock, Cork, where Dennehy will open a new branch in February. Photograph: Darragh Kane

Dennehy’s Gym in Douglas in Cork was celebrating its reopening on Tuesday with an extra bit of festive cheer, having seen off the challenge of not just the lockdown but a car park fire which put them out of business for 15 months.

A car went up in flames in August 2019 at the car park in Douglas Village Shopping Centre on the south side of Cork city. Management were left with no choice but to close for structural works.

When the works were completed shops and the onsite gym still could not reopen because of Covid restrictions.

Luke Dennehy, who owns the Douglas gym, in addition to other Dennehy’s facilities in Cork in Blackpool and Ballincollig said he felt a wave of excitement about being able to open their doors again after such a prolonged closure.

Mr Dennehy is so confident about the future of the sector that he has invested €700,000 to open a fourth gym at Penrose Dock in the city centre in February of next year.

Mr Dennehy says that customers have been counting down the days to the reopening of gyms. Their clientele now realise just how much routine means to them having endured months of semi-hibernation.

He admits he found it difficult to keep in the zone when it came to exercise, with most people needing the encouragement and motivation of fitness instructors in order to keep their health goals on track.

“We opened our doors at half six this morning and there were people in straight away.

“People who can exercise at home with the same intensity as they do in the gym are a rare bunch. Most of us need the routine and motivation of going to a gym... I definitely slept in longer. I ate more.”

Mr Dennehy says the fitness industry has responded well to the challenges of Covid. Stringent measures are in place and customers are very vigilant with handwashing and social distancing.

“A real positive has been our members realising how much they have missed the gym.

“People are really appreciative when they come in to the gym and have all the equipment with it all running so smoothly. Just getting out of the house and getting some normality back.”

Among the first people through the doors was shift worker Keith Magill of Douglas who says the gym really helps to give his weeks some shape.

“You never come out of the gym with regret. I dropped the kids to school and I was straight in here. I normally work nights doing a 12-hour night shift. It is so easy to stay in bed all day. When I come here I go in to work motivated. It is so good for your mental health. I am delighted to be back.”

Another gym user, who declined to be named, joked that she was as excited as a child on Christmas Eve. “The gym and then a look around TK Maxx. It’s the most I have been out in months.”