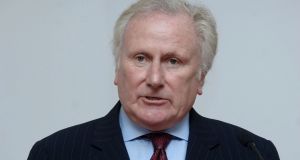 The North’s Lord Chief Justice Sir Declan Morgan said he was very saddened to learn of the “untimely death of Brian Kerr (above)” who retired on September 30th. Photograph: Presseye.com.

Tributes have been paid to the former Northern Ireland Lord Chief Justice Lord (Brian) Kerr who has died aged 72 just two months after retiring from the British supreme court.

Lord Kerr of Tonaghamore, who was originally was from Lurgan in Co Armagh, died after a short illness, it was announced on Tuesday.

Expressing condolences to Lord Kerr’s wife Gillian, his two sons and their families, the current Lord Chief Justice of Northern Ireland Sir Declan Morgan said he made an “enormous contribution” to the courts in Britain and the North.

Lord Kerr was educated at St Colman’s College in Newry, Co Down, after which he took a law degree in Queen’s University, Belfast.

He was called to the Bar in 1970 just as the Troubles were flaring and was appointed a QC in 1983, serving mainly as a prosecution counsel.

He was appointed a High Court judge in 1983 and subsequently served as the North’s Lord Chief Justice between 2004 and 2009, when he was appointed as one of the first judges in the newly-created British supreme court.

His death was first announced at the start of a trial at Craigavon Crown Court in Co Armagh on Tuesday morning by Judge Patrick Lynch QC. He told the jury he had just received the news that the “local boy” had died having had a “distinguished career” as both a barrister and judge.

The North’s Lord Chief Justice Sir Declan Morgan said he was very saddened to learn of the “untimely death of Brian Kerr” who retired on September 30th.

“It is very unfortunate that he did not get time to enjoy his retirement after his long career in the law and public service on the Bench. He made an enormous contribution to the work of the courts both in this jurisdiction and in to the UK supreme court,” he said.

The president of the British supreme court Lord Reed said Lord Kerr became a high court judge “at a time when the decision to serve as a judge in Northern Ireland required courage and a strong sense of duty”.

“Through his judgments and during hearings, Brian demonstrated his strong and instinctive sense of justice, and his thoughtful and principled approach to resolving legal problems,” he said.

Lord Reed said Lord Kerr had left a “legacy which will be drawn on well into the future,” while adding, “Brian was a deeply valued colleague, a kind and modest man of the utmost integrity, who will be deeply missed by all those who had the pleasure of working with him.”

The flag of the supreme court has been lowered to half-mast for Tuesday and Wednesday.