‘I became unemployed during the pandemic. I am excited to educate myself culturally here’ 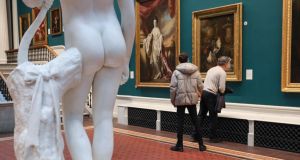 Visitors at the National Gallery of Ireland after it reopened today. Photograph: Crispin Rodwell

The traffic-light entry system displayed on a screen at the entrance to the National Gallery of Ireland was showing green at 9.45am on Tuesday. The doors had just opened to the public after weeks of lockdown. The screen at that time showed 330 people could enter, and that zero people needed to queue.

Inside the gallery buildings, on Merrion Square in Dublin, all staff and the few visitors I saw were wearing face masks. The Milltown wing was empty. The only person looking at Jack B Yeats’s frantic paintings at that hour was me – a rare privilege in what’s usually one of the gallery’s most popular rooms.

Éanna Whelan, a production and event risk manager, was looking at portraits upstairs. “I have been finding that my ability to do the things I usually do to refuel the tank – seeing art, seeing friends, travelling – has got lower and lower during the pandemic,” he said. “So every chance I get to refuel the tank, I grab it with two hands, like being able to come here again today.”

“I have so missed coming here,” said Catherine Woods, from Drumcondra in Dublin. She had been to view one of her favourite pieces, an Evie Hone painting. “There is a peace and a kind of stillness you get as soon as you come in here. I am so uplifted by the paintings, and the building. Usually, I am in and out of here all the time.”

“This is my favourite place in Dublin,” explained Lucia Sweeney. “You can see all of Ireland represented in one place, in different eras. It’s a gem in our heritage.”

Sweeney had sidetracked, as several others were doing, to visit the ever-popular gallery shop. “I came to buy these postcards to send as Christmas cards this year,” she said, pulling a stack of reproductions of Mildred Anne Butler’s Shades of Evening, a 1904 watercolour of birds returning to leafless trees, out of her bag.

Art is the food of life. It has been so hard not to be able to access any of it

It was noticeable on the short walk between the National Gallery and the National Museum of Ireland’s archaeology branch, on Kildare Street, that about 90 per cent of people were wearing masks.

“Do you have a booking?” I was asked politely on entering the museum, which was much less busy. I did not. I was invited to the front desk to give my tracing details, which hadn’t been requested at the National Gallery.

The museum does keep a number of spaces for walk-ins, so I was allowed through; they had 12 prebookings in total for the day. Currently, 70 visitors is the maximum number allowed in here at any one time, but there were probably only 10 others at most when I visited.

Patrick Salmon – “spelled like the fish” – had come in especially to see the new, modestly sized exhibition called Glendalough: Power, Prayer and Pilgrimage. “I booked it last week,” he explained. “ I thought it’d be a good time to come, when there are no tourists.”

“I became unemployed during the pandemic,” Madeline Parkinson said. “I am really excited to educate myself culturally in a safe, secure way, when there are not many people here.”

“Art is the food of life,” Fiadh Trevaskis Hoskin said, standing beside a cabinet of gold torcs. “It has been so hard not to be able to access any of it.” Hoskin had planned an entire day of culture. She had already been to the National Gallery. “But they didn’t have the lights switched on for the lightbox of my favourite piece, Harry Clarke’s Song of the Mad Prince,” she said. Next on her list was the Chester Beatty, at Dublin Castle, and the final stop was to be the Hugh Lane gallery, on Parnell Square. “I have been so looking forward to this day.”