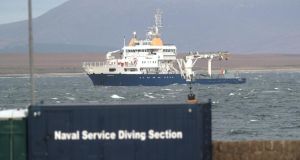 The Marine Institute’s remotely operated vehicle is now down in the water and weather conditions are favourable, according to Irish Coast Guard operations manager Gerard O’Flynn. It is scanning the seabed off Blackrock island, 13km west of the Co Mayo coast, where the airmen’s Sikorsky S-92 helicopter crashed, in the early hours of March 14th. Senior pilot Dara Fitzpatrick (45) and copilot Mark Duffy (51) were the first two confirmed casualties of the crash.

A specialised sonar has been fitted to the remotely operated vehicle, Holland I, which has been working on the crash site for three weeks, led by Holland I’s senior pilot, Paddy O’Driscoll, and involving contractors from Ireland and Britain.

A fleet of fishing vessels from around the coast will converge on Blackrock island at first light on Saturday to sweep the Atlantic seaboard for any signs of the two men.

Ciaran Smith (38) received awards for his role in search-and-rescue missions during his career with the Air Corps and Irish Coast Guard, including one shared with Capt Duffy for the rescue of a woman from a cliff near Howth, Co Dublin, last year. Mr Smith would have marked his 39th birthday this Sunday with his wife, Martina, and children, aged 12, 10 and seven. A keen cyclist, he had raise considerable funds for charity.

Paul Ormsby (53) was a highly respected winch operator in both the Air Corps and Irish Coast Guard who had participated in many hazardous rescues and medical evacuations. He was commended for his role in a joint Irish Coast Guard tasking to winch 17 Spanish and Portuguese fishermen from a burning fishing vessel, the Milford Eagle, about 250km west of Shannon in January 2000.

The co-ordinated search by fishing vessels will set out from Blackrock lighthouse at 9am and extend up to Arranmore island, off Co Donegal. Three fishing organisations have emphasised that safety must be paramount in their support for the effort, following an appeal on Monday by Mr Smith’s sister, Orla. “It is the least we can do for the Irish Coast Guard, which has done so much for us,” the chief executive of Killybegs Fishermen’s Organisation, Sean O’Donoghue, said. About a dozen vessels, mainly refrigerated-seawater or larger tank boats, plus some whitefish vessels, will sail down on Friday evening and undertake a reconnaissance en route, he added.

They will be joined by a fleet of smaller inshore vessels from around the coast, according to Eamon Dixon of Erris Inshore Fishermen’s Association, who has welcomed the response of Killybegs Fishermen’s Organisation and the Irish Fish Producers’ Organisation.

“Malin Head Coast Guard is working out search patterns for us, and we hope to search every square mile from Clare island in Co Mayo to Dunfanaghy, both inshore and up to 35-40 miles west, weather permitting,” Mr Dixon said.

Killybegs Fishermen’s Organisation and the Irish Fish Producers’ Organisation have asked all fishing vessels in the area to watch out for debris from the helicopter, although they have appealed to owners of smaller vessels not to risk going to sea in a very fickle part of the coast.

Erris Inshore Fishermen’s Association said that safety is paramount. “For this reason we are asking all vessels intending to engage in the sea search to check in on the morning of the search with their local RNLI lifeboat or Irish Coast Guard vessel. Upon completion of the search all vessels must report back to the lifeboat or coastguard vessel. This is to ensure that all vessels return safely to harbour.”

It said all crew must wear life jackets and operate within normal safety procedure, and it appealed to skippers to obey instructions from the RNLI or Irish Coast Guard.

The Irish Coast Guard said earlier this week that it had extended shore checks as far south as Cleggan and up to Co Donegal, where debris from the Rescue 116 helicopter was washed up at Portnoo a fortnight after the crash.

A Naval Service patrol ship, currently the LE Ciara, is also staying in the area, to co-ordinate the sea search.

Rescue 116 wreckage was taken to the Department of Transport’s air-accident investigation unit facility in Gormanston, Co Meath, on Wednesday. It includes the helicopter’s rotor head, its main gearbox and one of its engines. The unit has already ruled out mechanical fault in its initial analysis of the helicopter’s black-box data.