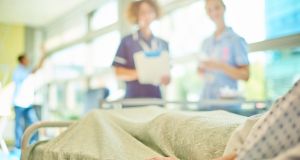 A Dáil committee on the future of healthcare says the disentangling of the private and public sectors will significantly reduce out of pocket health payments by families. Photograph: iStock

Creating a single-tier public health system that is largely free for patients will cost an estimated €5.4 billion over six years, according to the draft report of the Dáil committee on the future of healthcare.

However, up to €1.5 billion could be cut from this bill by diverting the savings accruing from reduced out of pocket payments and a reduced need for private insurance to a new national health fund, it says.

The extra funding needed to realise a vastly improved health service comprises up to €400 million a year in additional health funding and €3 billion to fund the transition to a single-tier system and sort out legacy arrangements.

The report, seen by The Irish Times, proposes the phasing out of the tax subsidy for private health insurance, with the resulting savings being use to expand patient entitlements and cover the cost of the transition to a new system. This could add up to €600 to the cost of insurance for a family.

The committee says the disentangling of the private and public sectors will significantly reduce out of pocket health payments by families, lower charges and lessen the need for private health insurance. Conversely, households may have to pay additional charges through general or earmarked taxation or existing levies, depending on how fast the health moves to a single-tier system.

The report advocates an end to the State subsidy for private health insurance, with this money being used for a national health fund to expand entitlements and transition to a new system.

It says transitional funding of €500 million a year for the next six years will be needed to fund the change to a new system. Finding this money is a matter for the government of the day, it says.

Overall, moving to a single-tier system would cost an additional €4.3 billion over the lifetime of the plan, it is estimated. Additional costs of almost €6 billion would be offset by diverting €1.5 billion in personal savings on out of pocket payments and insurance.

The committee is due to deliver a final report within weeks, after which the Government will decide whether to implement its proposals.