Happy Bertie: Big day for Teflon and the ex-taoiseach

Out of the frying pan: The ‘Teflon Taoiseach’ was a household name in the 1990s 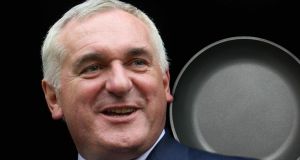 Before Bertie Ahern, it was just that slippy stuff that stopped your sausages sticking to the frying pan on a Sunday morning.

But owing to the former taoiseach’s ability to have mud slung at him and then have the same mud quickly slide away, Teflon became an oft-used term in political discussions and in ordinary households across the nation from the late 1990s when Bertie took office. The Teflon Taoiseach was born.

Today is a big day for both Bertie and Teflon. Teflon celebrates its 79th birthday, while the ex-taoiseach celebrates being back at the scene of his outstanding achievements in office. Mr Ahern, who is 14 years younger than Teflon, is giving his wisdoms to the Seanad Committee on Brexit.

On April 6th, 1938, scientist Dr Roy Plunkett was working at a Du Pont laboratory in New Jersey when, by accident, he made a discovery that would ultimately lead to the mass production of Teflon-coated kitchen utensils.

Watch: Bertie Ahern at the Seanad

Here’s the science (according to the Du Pont website): while working with gases related refrigerants and having checked a frozen, compressed sample of tetrafluoroethylene, Dr Plunkett and his colleagues found that it had polymerised spontaneously to a white, waxy solid: poly-tetrafluoroethylene.

Upon further examination, the material was shown to be resistant to almost every chemical and solvent and its surface was so slippery nothing would stick to it. Added to that, it could take pretty much any temperature you threw at it, including while frying up a few rashers and sausages.

It wasn’t until the 1960s that the substance would make its way into many households across the world.

In 1977, the 25- year-old accounts clerk at the Mater hospital in Dublin stood for Fianna Fáil in the three-seat constituency of Dublin-Finglas. He went on to become lord mayor of Dublin and take a number of government ministries, eventually becoming taoiseach in 1997. His career high point was the signing of the Belfast Agreement in 1998, but his reputation was to be dogged by the economic crash and issues surrounding his personal finances. He resigned as taoiseach in 2008 after 11 years in the job.

It has been a while since Ahern knocked around the corridors of power. The committee room is in the bowels of Leinster House not too far from the Dáil chamber, outside of which hangs Ahern’s official portrait.

As the Teflon has re-established itself over the last number of years, Ahern may take a wander to meet up with some old acquaintances.