Fennelly finds no criminal cases affected by recording of calls 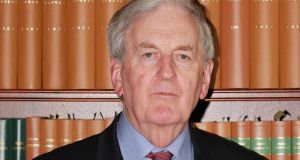 Mr Justice Nial Fennelly: also investigated the implications of the recording of calls at Bandon Garda station related to the investigation of the death of the French film producer Sophie Toscan du Plantier, in 1996.

No criminal cases were materially affected by the recording of telephone calls in and out of Garda stations around the country, the Fennelly Commission has found.

Ministers are currently being briefed on the content of the report, which runs to around 800 pages. It is expected to be published this afternoon.

In the case of Ian Bailey transcripts of phone calls at stations were reviewed and the commission concludes there was improper conduct in that specific incident.

The Commission, it is understood, asked the Director of Public Prosecutions (DPP) to review 151 cases where it felt taping may have been a relevant issue. The DPP is understood to say none of these cases were affected.

The final report of the Commission, which will be published on Thursday, will also suggest that the recording of phone calls is good practice and should be continued.

Report of the Fennelly Commission

It finds, however, that the while the practice was not illegal or criminal, it suggested legislation could be passed to make it lawful.

The taping of phone calls began in the mid 1970s, initially just on 999 calls to Garda stations. Due to systems upgrade in 1995, there was a much greater capacity for recording calls and it was extended to encompass the main telephone lines in Garda stations.

The decision to extend the recordings, it is understood, was taken by the telecoms division in An Garda Síochána and not by senior officers or management.

It was later upgraded in 2008 and the practice continued.

It is understood that the majority of phone calls of a sensitive nature were diverted to different phone lines within stations, and the recordings then stopped.

On the issue of the retirement of Martin Callinan as Garda Commissioner when the existence of the taping of phone calls first emerged in 2014, it says undue alarm was raised within Government on the issue - which will be read as an implicit criticism of Attorney General Máire Whelan.

The lengthy report – it runs to more than 700 pages – was delivered to the Department of the Taoiseach last Friday.

It has been examined by the Attorney General who cleared it for publication early this week.