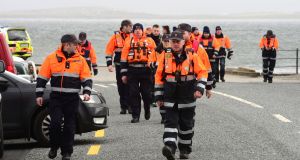 As an extensive search continues for three missing Irish Coast Guard helicopter crew off the Mayo coast, efforts will continue to pinpoint the signal from the black box recorder which was detected on Wednesday.

The “faint chirp” was picked up in some 40m of water about 50-60m from Blackrock, marked by an 83-metre high lighthouse, 13km west of Blacksod.

The precise location of the signal has to be confirmed before divers can be sent in, initially with remote operating vehicle (ROV) equipment, according to Irish Coast Guard operations manager Gerard O’Flynn.

However, there is no confirmation that the device, which contains essential flight recorder information, is with the missing aircraft.

The Dublin-based search and rescue helicopter was close to the westerly lighthouse at Blackrock when its last communication was recorded at 12.45am on Tuesday.

It had been tasked to provide cover for the Sligo-based Coast Guard helicopter on a medical evacuation, and was turning in from sea to make an approach at Blacksod lighthouse for a routine refuel when it disappeared.

No mayday was issued, and no transponders or satellite locator beacons have been detected since the crash, which claimed the life of senior pilot Capt Dara Fitzpatrick (45).

“These people have saved so many lives in the past and have now lost their own . . . It makes it a tragedy of proportions which are unimaginable,” Mr Ross said.

“I have spoken to the Taoiseach about it and we agreed immediately that every single resource available in the State would be made available . . . There will be absolutely nothing left . . . Everything possible will be done,” he said.

Asked if there were any plans for safety reasons to ground the fleet of Sikorsky S-92s, provided to the Irish Coast Guard by CHC Helicopter, Mr Ross said he had “heard absolutely nothing about that whatsoever” and “no suggestion of it”.

“Our concern is with the grieving families,” he said, and investigators were “working day and night”, but the cause of the crash was still not clear.

CHC said the company maintained full confidence in the S-92’s safety and design, and the aircraft was in compliance with all airworthiness directives and alert service bulletins.

Sikorsky, which is owned by Lockheed Martin, said it would continue to work with the AAIU.

Commissioners of Irish Lights chief executive Yvonne Shields offered the organisation’s sympathies, and its continued support for the search effort, on a visit to Blacksod on Wednesday.

Ms Shields said the Blackrock light was fully functioning on the night of the helicopter crash, as was the automatic identification system used for collision avoidance at sea.

Ms Shields said her organisation’s multipurpose ship, Granuaile, which has lifting equipment, was available when required. It has also offered helicopter support.

British air accident investigators with additional specialist equipment were due to arrive at Blacksod on Wednesday evening.