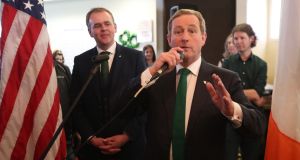 Taoiseach Enda Kenny addresses members of the Irish American community in Philadelphia, as part of his US visit. Photograph: Niall Carson/PA Wire

Taoiseach Enda Kenny has rejected a claim by Brexit campaigner Nigel Farage that he described US president Donald Trump as racist.

Asked about Mr Farage’s call on the Taoiseach to apologise for the “vile things” he said about Mr Trump last year, Mr Kenny said: “I did not refer to the person, the now President, as being racist. My comment was in respect of his language. Language and words can be used by people in many regards.

“My comments was when he was running as a candidate in respect of the election to be held.”

Last May Mr Kenny accused Mr Trump, then one of the candidates for the Republican presidential nomination, of using “racist and dangerous” language.

Pressed on the issue by reporters in Washington, the Taoiseach said: “I’m not into English classes. The language that was used [by Mr Trump] on that occasion was in my view not that language that I would use but it was not related to his personality.

“I haven’t come to America to answer to Nigel Farage. I am proud and privileged to be the leader of the Irish Government. I’m responding to an invitation sent by the president of the United States and I’m happy to go to the White House to continue the traditional connection between Ireland and the United States symbolising the contribution Irish people have made over many centuries and the fact that we want to continue with that.

“I’ve nothing further to say in respect of comments made by Mr Farage.”

Fresh questions were raised at the same press conference about the Taoiseach’s leadership intentions after a version of a speech he was due to deliver at a dinner on Wednesday evening in Washington was retracted.

Asked why the line had been taken out, Mr Kenny told reporters: “Because it shouldn’t have been in there. That’s why.”

He said: “I’ve already explained to my own parliamentary party my intention and how I intend to go about that.”

A spokesman said that the speech that was issued initially was not approved by the Taoiseach “hence the requirement to reissue the correct speech”.

Earlier, Mr Farage said Mr Kenny was “wasting his time” visiting the White House because of his comments about the president.

“Let’s hope that the first thing he does is apologise to Donald Trump for saying vile things about him consistently during the campaign,” the former Ukip leader told RTÉ’s Today with Sean O’Rourke.

“I think that might be a good starting point. Because Trump won’t have forgotten that.

“Maybe Donald will let bygones be bygones, but I would have thought Kenny is wasting his time, if he has been as abusive about the president as he has and if he’s going to try to sell to Donald Trump the idea that an independent sovereign state like Ireland is giving away their ability to make their own laws to Mr Juncker — I think he might be surprised by what Mr Trump has to say to that.”

When queried about how “vile” Mr Kenny’s comments were, he replied: “How much more insulting can you be than to call some one racist. I think he needs to apologise.”

Mr Farage was the first British politician to speak to Mr Trump after his election and has met the president more than once, including joining him for dinner at his Florida estate.

Mr Kenny is expected to launch a strong defence of the achievements and benefits of the European Union when he meets Mr Trump .

Mr Kenny will become the first EU leader to meet the president after Theresa May following the postponement of German chancellor Angela Merkel’s visit to the White House until Friday.

The US president has been a frequent critic of the EU, describing Brexit as a “great thing” and urging other countries to follow Britain in leaving the bloc.

Speaking ahead of the meeting, Mr Kenny said it was important that the US administration had a “full view” of what Europe stands for.

“European leaders need to be over here talking to Republicans, Democrats and the administration about what membership of the European Union means and the relationship that it can have with as powerful an entity as the United States. It is important that the full story be given here.”

He added that he thought the Trump presidency would be softer on illegal immigrants “that have actually made a life for themselves and are obeying the law and contributing.

“I think the Trump regime will be very tough on illegal immigrants that are operating outside the law, but above all — he was elected to do two things, one bring jobs back to America, that is happening in spades, companies are opening up manufacturing all across the mid west. The second thing he was elected to do was to stop that massive flow of illegal immigrants coming in from Mexico.

“All across the west, and 2016 saw this, there is a move back towards nation state democracy — a move away from super national false governments like the European Union and all of us want to control our borders and have a proper immigration policy.

“That is not racist, that is mature and sensible and that is what Trump is saying, it’s what I’ve been saying. It’s what many other political figures now across the whole of Europe are saying.

“At one point there will be a political movement in Ireland that says the same thing, because Sinn Féin used to say these things, they used to stand, actually for Irish independence and now they too have sold out to the European project.”

4 Coombe master must resign after ‘serious errors’ in vaccine scandal, board told