Fewer than 33% of working-age people with disabilities employed 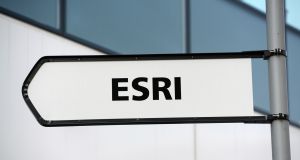 The ESRI report finds people with disabilities are four times less likely to enter the workforce than people without a disability, and more likely to leave it

Fewer than a third of working-age people with disabilities are employed and without Government intervention this is unlikely to change, a report published on Thursday warns.

Drawing on data from the CSO’s quarterly national household survey, it finds: “Forty-two per cent [of adults with disabilities] had no more than the equivalent of a Junior Certificate. They were more likely to live alone and 42 per cent lived in a jobless household so were at a high risk of poverty.

“Just 31 per cent were at work, but most [82 per cent] had at least some work experience. One half of people with disabilities were either at work or interested in working,” says the report.

It finds people with disabilities were four times less likely to enter the workforce than people without a disability, and more likely to leave it.

“These include being older, having lower levels of education and living in a household where nobody is at work. Even taking these characteristics into account, however, the odds of employment entry for the non-employed were found to be only about half as high for people with disabilities as those without disability.”

The greater the impact of the disability the less likely they are to be in employment, with people with an intellectual disability having a “particularly low” likelihood of being in work.

However, more must be done to enable people to stay in work and move into work. The latter group “is much larger” so “policy to enhance the employment opportunities of people with disabilities cannot afford to ignore this group”.

“Given the diversity of circumstances of people with disabilities – in terms of the nature and severity of the disability and their level of education and family support – the optimum mix of income support, retention of benefits and employment support will need to be tailored to the individual’s specific needs.”