Miriam Lord: Enda wings it but then ducks Donald question 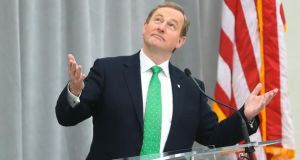 Taoiseach Enda Kenny delivers a speech to business leaders at a lunch at the American Institute for Peace in Washington on Wednesday. Photograph: Niall Carson/PA Wire

Breakfast time in Washington DC and a motorcade screams around Dupont Circle, sirens blaring and lights flashing. It’s nothing huge, just a couple of black Jeeps and three or four cop cars.

No big deal in this city; the only people stopping to watch it pass are tourists.

Two little flags flutter on either side of the leading Jeep’s bonnet – an American flag and an Irish one. As the saying goes: a Taoiseach never flew on one wing.

And there’s Enda, sitting inside and waving out, cocking a finger and pointing it out the window, doing the ol’ firing off the handguns routine. For he is in America the Beautiful mood and is grinning from ear to shining ear.

He’s going to have to leave all this behind soon. It’s sure going to be a wrench.

But we didn’t realise exactly how much of a wrench until a strange little incident took place later in the day.

Why else would there have been such a kerfuffle over an innocuous line which appeared in an initial draft of his speech at a black-tie function last night, only for it to be whipped out when the hastily amended address was reissued to the media? Had the “correct” speech not been sent out, nobody would have noticed.

The offending sentence was near the end of his speech at the 25th National Gala of the Ireland Funds America, where vice-president Mike Pence and senator George Mitchell headed the list of guests.

Enda waxed lyrical for his audience on this, his seventh trip to the US for the St Patrick’s week festivities.

He had just finished his misty-eyed take on Lady Liberty opening up her door and the Irish opening up their skills, diligence and hearts to America when he paused to remember an old friend.

He wanted to say a few words “on this night – my last night with you as Taoiseach”.

Second time around, that bit was missing. But why? Was it not his last night?

“The speech that you got is not the speech I’m delivering tonight. That’s why,” replied Enda, adding that he’s already told his parliamentary party what he intends to do. (Announce his plans about stepping down.)

So why bother taking out the line this being his last Ireland Funds dinner as Taoiseach?

“Because it shouldn’t have been in there,” he replied, sounding rather peeved. Then he gave a little laugh.

A spokesman later clarified that the “speech that was issued initially was not approved by the Taoiseach, hence the requirement to reissue the correct speech”.

Which is all rather pointless as nobody is under the impression that Enda will be in charge next year. It shows a strange mindset at work. Or perhaps, for this week at least, he simply can’t countenance the truth.

After the thrill of that morning’s trip to Capitol Hill (when the Taoiseach is in a Jeep in a motorcade dedicated to him, he looks really, really, happy, like when you put your dog in the car for a drive and you have to close the windows in case he jumps with the excitement), followed by his feelgood business lunch, the lunchtime press conference was strained.

He was asked about Nigel Farage stirring mischief ahead of Thursday’s White House visit. The former Ukip leader-turned-Donald-Trump-fanboy said the Taoiseach should apologise to the president for “vile” comments he made about him during the US election campaign.

In the Dáil, Enda described comments made by then candidate Trump as “racist and dangerous”. Eight months on, how does he feel?

There followed a reply which would do justice to the man Enda is paying a call on. You see, the Taoiseach wasn’t referring to “the person of the now president as being racist”. Oh, no.

Enda’s comment was about Donald’s comment. Not about the man, but on the words coming out of his mouth. “Language and words can be used by people in many regards,” he said.

It wasn’t the Donald. The words did it.

Thursday is the big day.

That big date in the Oval Office with Trump. Thanks to a weather whiteout this week, Angela Merkel had to reschedule her visit, so Enda will be the first European prime minister to visit the new president since Trump solicitously manhandled Theresa May down Oval Office steps in January.

And Pence’s views on issues such as LGBT rights? The Taoiseach will mention the “expressions of joy and exuberance” in the VP’s ancient homestead when the referendum to introduce same-sex marriage was passed. That’s “if I have the opportunity in talking to the vice-president”.

Plenty of them – at the Ireland Funds gala last night and at breakfast this morning.

Breakfast with lots of people in attendance, lest anyone get the wrong idea.

Meanwhile, we can only hope Trump won’t be too exhausted when they meet. He was doing a “Make America Great Again” gig last night in Nashville. Trump is all over the television on all sorts of things – healthcare, his taxes, the Russians, wiretapping and the CIA, not to mention a row with rapper Snoop Dog.

But Enda and Donald should have plenty to talk about. It’s going to be a great meeting. Tremendous.

The eyes of the world, or the US, may not be on him, but we can’t wait.

And back to that dropped line about being here this time next year. After a video was shown at the launch of the Government’s Ireland.ie web portal at that business lunch, the Taoiseach resumed his speech.