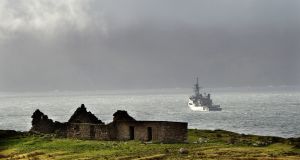 White to sea, red to land, the light from the tower lantern and dome at Blackrock in north Mayo can be seen for almost 40km.

Built in the middle of the 19th century, the lighthouse lantern panes and roof were damaged by German bomber gunfire in 1940.

Throughout the past three days, since Rescue 116 issued its last communication, the solar-powered light has continued to beam its warnings every 30 seconds – the only constant during a time of turmoil, grief and loss just 13km east.

On Wednesday afternoon, a small group of people – one clutching a soft toy, several holding each other, struggling with tissues and tears – walked slowly towards a house close to Blacksod pier.

If they knew each other beforehand, the families of the missing helicopter crewmen were about to become close friends in a way they had never anticipated.

“Unthinkable and unspeakable” was how Minister for Transport Shane Ross described the situation, struggling for words after he arrived and prepared to meet relatives and friends of Capt Mark Duffy, winch operator Paul Ormbsy and winchman Ciaran Smith.

Several hours before, shore rescuers had stopped in their tracks as they heard John and Mary Fitzpatrick, parents of late pilot Capt Dara Fitzpatrick, and her sister Niamh speak movingly of a daughter and sister on RTÉ Radio.

They had no regrets about how the experienced pilot with the “sunny presence”, who adored her three-year old son, Fionn, had lived for and loved her job, and helped so many during a stellar flying career.

“Her face is beautiful, she’s not marked – we keep looking, saying she’s going to wake up and say ‘boo’,” Mrs Fitzgerald said, as she described how they had kept Dara company overnight in the mortuary in Castlebar.

“The idea that people whose purpose in life, whose motivation in life, is to save lives have lost their own lives makes it even more poignant than ever,” Mr Ross told reporters at Blacksod.

“These people have saved so many lives in the past and have now lost their own... it makes it a tragedy of proportions which are unimaginable,” he said.

West of Blacksod, out of sight but very much in mind, the Irish Coast Guard Shannon and Sligo-based rescue helicopters continued their searches, assisted by the Air Corps, RNLI and fishing vessels, while Naval Service patrol ship LÉ Eithne and LÉ Róisín provided on-scene co-ordination and wreckage retrieval.

From first light, the Marine Institute’s smaller research vessel, Celtic Voyager, had been preparing to deploy a high resolution EM 2040 multibeam and digital side-scan, both normally used for seabed mapping and fisheries surveys.

The equipment’s seafloor scanning ability is considerable, with a range of 600m below water and just over 100m on each side of the vessel. An underwater map could be created in the relatively tight search area around Blackrock lighthouse within several days, if weather permitted.

The sea area around the rock, with its 83-metre high tower, is forbidding at the best of times, and smaller vessels would be required to make an approach.

So no one quite expected confirmation, within a half hour of Mr Ross’s departure, that a signal transmitting from the helicopter’s black box had been picked up.

“It is a very faint signal – a chirp – and as you go towards it, it gets louder,” Mr Whyte said. “It is a bit of a needle in a haystack situation, and you are trying to triangulate from different areas to get the loudest noise.”

“When you get the loudest noise, you know the wreckage should be beneath that point,” he said. Once the location is pinpointed, divers would deploy a remotely operated vehicle.”

He described the find as “hugely significant”, while emphasising that much work was still to be done – and the forecast for the next 24 hours was not great.

The “chirp” had been picked up in 40 metres of water, and within 50 to 60 metres of Blackrock light.

Other investigating authorities have spent months, literally, trying to do same thing. “We are very lucky that within less than 36 hours we have picked up what is a signal,” Mr Whyte said.