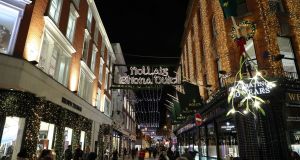 Despite rumours that Christmas in Dublin had been cancelled this year, the city will be going fully festive with laser light shows as well as the traditional Christmas lights.

For the month of December colourful wintery scenes will be projected onto the city’s most recognisable buildings at 17 locations including the GPO, Trinity College, the Custom House, the Mansion House and City Hall, using eco-friendly LED lights.

There will be an “enhanced display” in Smithfield, Dublin City Council said, featuring photos of frontline workers to thank them for their contribution in helping to keep the city running. In addition “ heartwarming winter scenes and messages of hope” will be projected on to Samuel Beckett Bridge, Civic Offices at Wood Quay, City Hall and the Mater Hospital, the council said.

Doubts emerged last month over whether the traditional Christmas lights, which are erected by business organisation Dublin Town would appear this year due the Covid-19 pandemic. The lights in the city’s shopping streets such as Henry Street and Grafton Street are paid for by city businesses, and Dublin Town chief executive Richard Guiney in October said they may not be in a position to fund them this year.

However, the organisation today confirmed it would go ahead with the lights, which are set to be switched on in about one week’s time. This will include the “Nollaig Shona Duit” sign, controversially removed from Grafton Street last year.

The sign had been replaced with a sign that read “Welcome to Grafton Quarter”, but it proved unpopular with some businesses, councillors and hundreds of social media users. Dublin Town said the Irish language sign will return to Grafton Street this year.